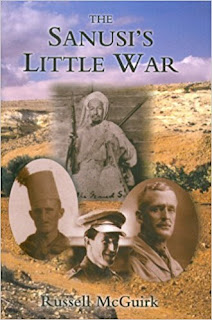 A quite superb book
I have mentioned a number of times of my fondness for Bob Cordery's Portable Wargame system and this has been recently reinforced (as if it needed any such assistance!) by his recent sequence of games set in the Shin Valley on the NW Frontier. My plan is to use these rules and my collection of Heroscape tiles in conjunction with the 1/600th Tumbling Dice models I have been acquiring. I have flirted with a number of ideas for campaigns to represent using this method with contenders being the Arab Revolt - including the Sanusi and the Iraq version in 1920, the NW Frontier - including Waziristan, WW1 in the Caucasus, WW2 Western desert or something in the Aegean or possibly even something 'imagi-nation-ish'. Luckily the size of figures means that several armies can be represented using one basic paint job.
For any of the above conflicts a desert type paint job on the Heroscape tiles would suffice. As long at the result is suitably arid and barren it would be fine.
The interesting thing about the Sanusi affair is that much of the terrain fought over would see troops of a very different kind contesting the same area in WW2.
﻿
The following passage taken from Amazon gives you a good idea of what this particular conflict was all about.﻿
"This is the exciting story of a forgotten war, fought out on the fringe of the great First World War campaigns. At its centre stands Sayyid Ahmad al-Sharif, the Grand Sanusi, a charismatic Arab leader caught between the rival war aims of the Turco-German alliance and the British Empire. In November 1915 HMS Tara, a requisitioned ferryboat, is torpedoed by a German U-boat off Sollum on the north-west coast of Egypt. The 92 survivors, nearly all Welshmen, are handed over to Turkish and Sanusi soldiers across the border and sent as prisoners of war deep into the Libyan Desert. The Turco-Sanusi Army then overruns Sollum and pushes into Egypt. The British, occupying that country, are caught off guard and forced to launch a military campaign to expel the invaders. Over the next few months, four battles are fought before Sollum is retaken and the threat contained. Finally, the Duke of Westminster leads a large column of Rolls Royce armoured cars and Model T Fords into Libya to rescue the Welshmen. Based on original source material, The Sanusi's Little War tells for the first time the full story of the Turco-Sanusi invasion and the subsequent military campaign. The author describes secret German missions and Turkish efforts to win over the Grand Sanusi. He reveals the fascinating role played in the campaign by British officers, particularly Leo Royle. Most unexpected of all is his discovery that T. E. Lawrence played a role in these events".
So you have Turkish trained Sanusi regulars and irregulars against Imperial troops with armoured cars and aircraft. this has the makings of something rather interesting and more importantly, slightly more conventional than the more usual Arab Revolt.
One for the project pile to be filed under 'Contender'.﻿
﻿
Posted by David Crook at 09:36

I think that this neglected campaign will make an excellent PW mini-campaign.

Incidentally, when doing research for my book BROTHERS IN ARMS AND BROTHERS IN THE LODGE I discovered that one of the people whose military service I was researching served with the Herts Yeomanry, and took part in the fighting either the Sanussi.

The more I reread the book the more I was taken with the idea of 'PW-ing' the campaign in some way. The forces are small and have plenty of variety and using the Heroscape tiles would seem to be a good idea for modelling some of the quite challenging terrain.

This is certainly one for the new year.