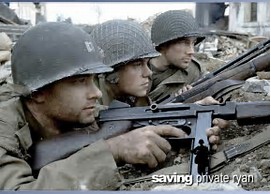 Tom Hanks in 'What's that coming over the hill - is it a monster?' mode from Saving Private Ryan.
﻿

The reasons that one embarks upon the wargamer's path are many and varied. My own 'baptism of fire' so to speak was probably a road trodden by many gamers 'of a certain age' in that I am firmly of what has been called the Airfix Generation. I have no issues with being labelled as such; quite the opposite in fact, I am proud to be part of that unofficial band of brothers - it means that I have a common ground with many of my gaming friends and so am able to share 'war stories' with them.

What sustains this though? More specifically, what sustains a gamers interest in a given period? I have often thought about this and in my case the answer is relatively straightforward. For the most part my gaming interests are many and varied but they generally have two things in common. Firstly, there exists a reasonable amount of reference material in the shape of the written word. This can take many forms including campaign histories, uniform and equipment guides, biographies of the commanders, unit histories and even works of fiction set against the period. That is simple enough and for my own part is a significant factor in the choice of period I wish to fight. I have always been an avid reader so for me this is hardly a chore - more like a pleasure to be savoured.

The second factor (and indeed this is why I wrote this post on the first place) is for me the visual appeal. This does not mean the look of the figures - this is important for some people, less so for me - rather it means how the events of history have been given life by the silver screen. I am of course talking about films and TV. 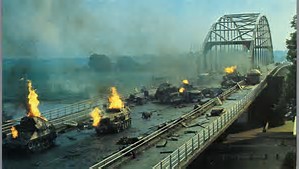 It is no coincidence that the periods of history I am interested in have also been translated into either film or TV. As wargamers we all have our favourites but it has only recently struck me how important this is to my enjoyment of the games I fight. Of course one has to take into account the fact that what we are seeing may contain inaccuracies (and I am sure we quote chapter and verse on many of the usual suspects in this case!) but for me it is all about capturing the flavour of the events depicted in a visual fashion. The usual film caveat of being 'based upon' what actually happened or of adding fiction against a historical backdrop is well known and as wargamers armed with our books of the period we are usually able to separate the wheat from the chaff. I do not rely on films for the hard facts but purely for the look of the thing. 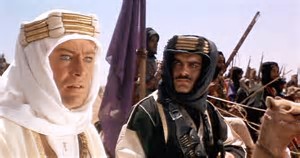 There are periods of history that keep coming back to as my interest waxes and wanes over time - invariably there is film that anchors it into my consciousness. 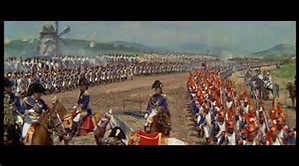 Waterloo, Saving Private Ryan, Gladiator, Spartacus, The Kingdon of Heaven, The Battle of Britain, Zulu, Lawrence of Arabia, The Sand Pebbles, A Bridge Too Far and others too numerous to mention are all a key part of my enjoyment of our hobby for the entertainment and visual motivation they provide. 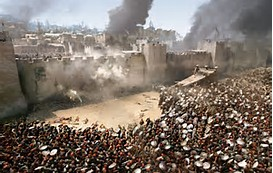 Assaulting the walls of Jerusalem from The Kingdom of Heaven
Although a film about the period in question is a nice addition to inspiration pool for a project it is my no means obligatory. There are periods of history I am interested in that try as I might I have not been able to find any viewing material, at least not in English. This would not stop me from trying it out but having a visual medium to watch should certainly serve to aid the inspiration, at least it does for me.
﻿
﻿
Posted by David Crook at 09:49

I find all sorts of films and books to be great source of inspiration for my wargaming. In fact there are times when I actively do not watch certain films or read certain books just in case it diverts me from a current project!

I must confess to never being that disciplined or as our old friend Oscar Wilde once said "I can resist anything except temptation".

Sadly I lack the willpower to avoid 'distractions'...:-)