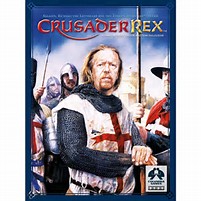 For the record this is not an 'ooh shiny' purchase - rather it is a substantial part of my long term Crusades project. I should add at this point that it is very firmly on the back burner - I reckon I have at least four other things to tackle beforehand - but the acquisition of the above game means that once I get around to it I will have everything I need to start. Actually that is probably not strictly true as there is always room for  the odd extra book at the very least. The written word is invariably my downfall and if there is one area that always suffers from 'project creep' it is with books.

Books are my weakness - my wargames Achilles heel so to speak.

Anyway, back to the business in hand. The above game is a strategic level depiction of the 3rd Crusade featuring Richard the Lionheart and of course Saladin. It is a fine game on a standalone basis but for me the extra value will be use it as a campaign canvas for a Portable Wargame based set up using the previously mentioned Risk figures or perhaps something else.

I am a great fan of Columbia games block based wargames as they are straightforward to play, are simple but not simplistic and have very good production values. One mechanic the games use is the 'fog of war'. Usually unit blocks are deployed on an edge with the strength side facing the owning player. This means that the opposition does not know the strength of a unit facing him or her until they attack it. Very simple and very effective.

In the meantime though, the ships take priority.
Posted by David Crook at 08:55

This is a great little game and a welcome addition to the collection. As mentioned there is a long term cunning plan in place but certainly not for the immediate future as I am busy painting ships.

I hope all is well down under and please say hi to 'Right Stuff' for me.