Jutland Part 4: The Reason Why 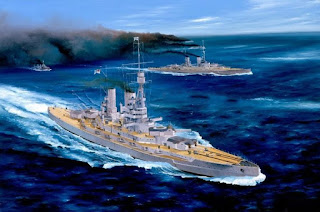 I think that one of the main things you need when undertaking the design or amendment of a set of rules is to have a clear idea of what it is you are trying to achieve. From my own experience it helps to be quite focused at this stage otherwise you can end up with an unwieldy and unplayable monster that raises more questions than it answers.

As I collate my notes and order my thoughts I figured it would be a good idea to set out what I am trying to achieve with the naval rules based on Jutland (and not Jutland based naval rules - an important distinction) project I am currently embarked upon.

What do I want?

1. A set of blue water naval rules that will allow for ANY ship type from torpedo boat destroyers up to dreadnoughts during the period 1895 to 1920.

2. Designed for use on a 6ft by 4ft table with a maximum firing range of 4ft and a maximum ship speed of 12".

5. To have a d6 based two stage combat process - roll to hit and if successful then roll for effect.

6. To use those game mechanics that are suitable from Avalon Hill's Jutland.

I think that is a fairly straightforward list to work with and seeing it written down makes (to me anyway) perfectly good sense.

I spent some of yesterday evening drawing up some ship specifications for a variety of types and was struck by how intuitive they appeared. For sure having generic gun types (more of which later) may seem like the easy way out but the rules will allow for variation of damage inflicted within the same notional category. Similarly there will be modifiers when the target ship is not of the same type as the weapon being used by the firing ship. An example of this would be a BB type weapon firing at a CA type ship or a DD type weapon firing at a CL type ship. There will be some overlap with this but all will make sense when the firing/damage table is drawn up.

I will detail the formula for the creation of a specific ship type in a future post but for the present the foundation of this is based on the following ship categories.

These broad categories are the basis of much of the rules in that they refer not only to gun types but also ranges and protection levels. There is flexibility with these, even within the same category,  so quite different ships can be represented under the same notional type. An example would be H.M.S. Dreadnought compared to S.M.S. Baden. They are both BB type ships but are very different. 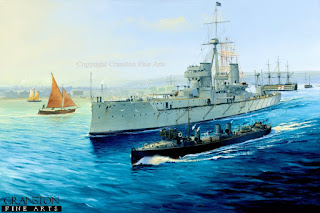 H.M.S. Dreadnought - the differences between her and the Bayern class are substantial as technology evolved into bigger, faster and more powerful.
﻿

Jutland as a game went some way to addressing ship type differences within the same notional category as far as was needed for the subject matter in hand - the system I will be using goes into more detail and is therefore more representational of the vessel being used.

I am planning to flesh out the process for creating ship damage cards in the next post and from then on will concentrate of particular areas of the rules and how they have come about.

I think that your BB classification is too wide.

I would add BC for battle cruisers.

I would also add a classification for superb dreadnought battleships.

These are the classifications used in the Jutland game itself and whilst they appear wide can be readily justified. BB includes battlecruisers as they were effectively fast battleships based on their main armament. At Jutland they were certainly used as such.

I assume you mean super dreadnoughts. Again these are included within the BB category and quite reasonably so as whilst the weaponry, armour and technology improved over time they were still used in the same way. Bear in mind that many pre war dreadnoughts were still in service at the end of the war alongside the newer types.

I did think about increasing the categories but wanted to stay true to those used in the Avalon Hill game. There will be differences that are obvious between ships of the same notional type in practice though.

Very much enjoying this series on Jutland.

As to British Battle Cruisers, how they were used (in the line of battle) seems to be different from their intended use (big enough guns to blast enemy cruisers and fast enough to run away from enemy battleships).

Expediency can lead to unintended consequences even in 1941.

Many thanks Sir - much appreciated. I think the problem was exactly how you see it. It would have been very hard for the Admiralty to decline to use the 12" and 13.5" inch guns and the speed advantage in a battle scenario. Personally I don't think they (the RN battlecruisers) were bad ships but merely that they were not used to best advantage. With the early British types having in effect armoured cruiser levels of protection they were always at a disadvantage compared to the German equivalents.

Having never played AH's Jutland, I cannot comment about the ship classifications, expect that I would expect the newer Battleships to have greater hitting power, more survivability, and greater speed,

Absolutely! As I said it would have too much for the navy to NOT use them in the battle line despite them being inadequately protected (I mean of course the earlier 'I's' rather than the 'splendid cats'.

The ships in Jutland have differences in terms of protection, speed and weaponry so a QE is stronger, faster and better armed ship compared to the Bellerophon for example.

Jutland does not go far enough with the differences though which within the context of the game is fine but not sufficiently so when away from the North Sea.

All will become clear in due course!