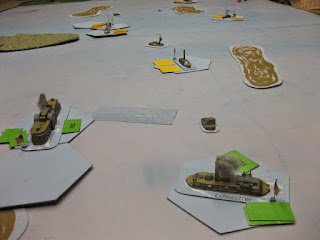 Hammerin' Iron by Peter Pig in action. Note the 'free hex' system in use. For a fuller account of action take a look at Trebian to whom thanks are extended for the use of his picture.
﻿

Although things have been very nautically inclined recently I have not been neglecting my ideas around the use of Bob Cordery's Portable Wargame series. For me the obvious fit would be WW1 and WW2 but I am also giving serious thought to something colonial. In fact, when I prepare the khaki army it would very simple to use some of the Tumbling Dice 1/600th open order infantry as loose order tribal irregulars of some type. Magister Militum have a large range of material in  this scale - far larger than the Tumbling Dice offering - so cherry picking odds and ends from them would be a useful alternative. Mounted camels would be very handy indeed for a couple of ideas!

I also have a large selection of the Peter Pig troop blocks that are available as part of their Hammerin' Iron ACW naval range. This is quite limited but covers infantry, infantry skirmishers, cavalry, artillery and command bases. the infantry blocks are rather nice and would be ideal for pretty much anything close order and linear for the 19th century. I am toying with the idea of using these for Napoleonics at some point - and Bob has mentioned the possibility of a dedicated Napoleonic Portable Wargame at some point.

My original thought in respect of WW2 was to replicate the approach from Memoir 44 using Heroscape tiles and 1/600th scale models. So far I have limited myself to what models Tumbling Dice have produced which is fine for the infantry and for the more vanilla vehicles. By that I mean I have a Panzer 4 F2, Shermans and T34/85s. Trucks, halftracks, artillery and antitank guns as well as armoured cars and SPs will need to come from magister Militum but I will not need many of them for sure!

Terrain will be pretty straightforward and I already have a selection of pieces that would suitable - including some palm trees! There are a few pieces available in the Peter Pig 1/600th scale Hammerin' Iron range that are useful as well including a rather nice farm/homestead

One of the other ideas I have been messing around with it the use of the Portable Wargame in a non-gridded way. I reckon that the core mechanics could be readily taken off the grid and games fought over a 2ft square playing area, DBA style. This is not an entirely original thought but it is a mechanism used in the Peter Pig Hammerin' Iron ACW naval rules. They make use of a 'free hex' mechanism whereby all combat and movement was handled using hexes but not on a hex grid as such. The unit being moved was assumed to at the centre of a hex orientated with a hex side across the bow of the ship (see the picture above to see this in action). This representational hexagon would then have the normal six sides facing off the ship for movement, turning and firing etc using hexes as the unit of measure. I think it could work with land actions as well and would give the advantage of opening up the playing area. I think it could also be used with squares and in fact think that they would benefit even more given the restriction of having four sides as opposed to the six of a hexagon.  It is something to ponder and I will give this some more thought in due course.
Posted by David Crook at 10:48

I will give it run out once the ships are ready but certainly it works for naval games. It should serve to open up the playing area. One thing is for sure though - the core mechanisms for combat and movement are readily portable.

The more I look at ACW Naval the more appealing it seems to become :)

On the 'free hex' thing, I have considered - even tried out - a system in which all measures were made in fixed increments (100mm or 4" on lieu of 100mm or 4" hexes). Ranges could still be measured, but determined by which 100mm interval they fell in.

Directions were 'free' as was the precise rate of your move. If your tank could travel 200mm, but it actually went 120, that would be immaterial: it went the equivalent of 2 hexes. If the target you were about to bombard was 347mm away, all you would need to know is that it falls in the '4-hex' range. This DBx system is quite quick to suss out.

The one 'play test' seemed to work OK, but one can't base one's judgment on just the one playtest. A friend once tried to 'reverse-engineer' DBM into a hex based system. That (to my mind) didn't go so well.

ACW naval is a lot of fun and it is something I will revisit in due course. The Peter Pig range of 1/600th scale models is quite impressive in terms of coverage and price and the models are very nice gaming pieces.

I never seem to be short of ideas - just the time to execute them!

It was an idea that popped into my head which I may have a dabble with in the new year.

Naturally any results will appear on the blog when I do!