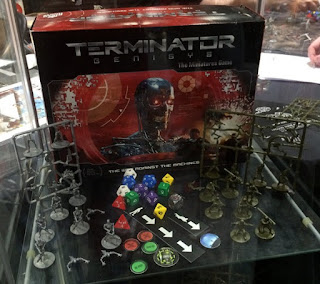 The same version I acquired except the box was slightly battered. Besides at £1.50 for 30 x 28mm plastic figures it was too good to turn down....
﻿

It has been a busy weekend - both on the domestic front and the gaming side. On the former I spent rather a lot of time on the phone organising the new buildings and contents insurance, the new energy provider, the travel insurance for our holiday next year and also the final part of the Christmas shopping for our grandson. I also (actually to be accurate is was very much a family affair) took a saw and some shears to the tree in our garden. It now looks rather forlorn but was hanging over next doors greenhouse, our shed and the washing line - so it really needed some TLC.

SWMBO assures me it will grow back although the two wheelie bins full of chopped up branch and leaves would suggest otherwise....

On the gaming front I managed to get some time in on the 1/2400th ships. Essentially the German destroyers have been cleaned up and the bases readied. I have used bases from Warbases and spent some time sealing them with some Rustins MDF Sealer. this is really good stuff as it has the effect of drying with a slightly rough finish which will take paint far more readily than the smooth and slightly shiny version straight out of the packet. the destroyers cleaned up very easily and had little in the way of flash. This evening I shall fix them to the bases and then make a start on their Royal Navy opposite numbers. This is a variation on how I usually do these things - normally I start with the battleships and work down - but I wanted to tackle these first as they are easier to do. they are the only models that do not require any assembly to start with, not to mention the fact that painting them will be a doddle. 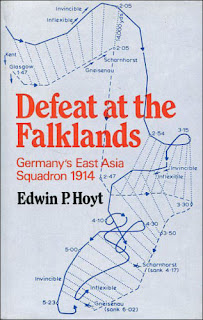 With thoughts of the China Station and the East Asia Squadron I suppose it was inevitable that my thoughts gravitated towards the Coronel and the Falklands in 1914. With this thought in mind I was delighted to pick up a copy of the above. Edwin P. Hoyt was a prolific author and wrote many books on the fringe naval side of the Great War. I have three other titles of his in my collection and there are several more I would like to add in time. His works may not be the most technically detailed available but they are easy to read and give the all important flavour to the subject. It is no secret that I am huge fan of the old naval wargame standard of 'hunt the raider' so this is a welcome addition to the library.

I also managed to spend some time finishing off some scenery for my square gridded Portable Wargame style table. This is 3ft by 2ft and is divided into 3" squares (meaning 8 x 12). I had made half a dozen hills using spare Jenga blocks and some offcuts of model railway grass mat some time ago and these are now virtually finished. All I need to do is to trim the edges which will take place this evening and they are then good to go.

Finally, I picked up a copy of the board/miniatures game you se in the photo at the top of this post. As a Terminator fan I was pleased when this first came out but baulked at the price being asked. Several of my gaming friends have tried the rules and they were distinctly underwhelmed by the experience. No matter because even the rules are not quite what I would like the models would be usable with any set of Sci Fi rules. One thing that crossed my mind would be a Space Hulk style game - for which I will speak to the redoubtable Mr Fox for his thoughts....In any event, £1.50 for the game was pretty darned good.

I shall be posting later in the week as I hope to have some pictures of the ships under way. It only remains to leave the last word to Arnie himself... 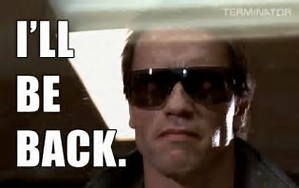 A fine haul and a good to see you get started on some PW. It’s a fine set of rules.

PW or even DPW are quite simply an outstanding piece of work. I have fought a number of actions using earlier versions of them but not from the published edition. That will be addressed shortly fear not!

£1.50 for the Terminator game was a steal! I managed to pick one up in a charity shop for £4.50, and I thought I was onto a very good thing!

In more synchronicity, I picked up a copy of Hoyt's 'Ghost of the Atlantic' last week and have it on by the side of my bed to read once I've finished Bennett's 'Naval Battles of WWI'.

I have a copy of Ghost of the Atlantic which is as yet unread although I suspect that may change soon!

The whole Terminator game thing does not seem to have been a stellar success and so is being heavily discounted at present. Even at £4.50 if you only use the figures that is still a bargain!