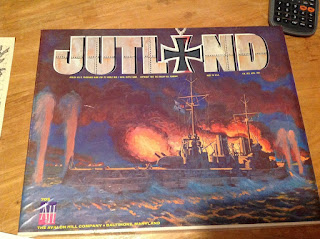 A piece of gaming history
﻿

You may recall that I am a huge fan of the Avalon Hill 'board-game without a board' of Jutland. I had planned to use a variant of this for my ill-fated refight of the battle to coincide with the centenary last year but unfortunately I left it too late to organise properly. The ships raised for that particular undertaking have long since departed - my scale of choice was 1/2400th rather than 1/3000th although with hindsight this was a mistake - and I have no immediate plans to revisit the action using models anytime soon.

Anyway, the reason for this post is simply because as part of my ongoing naval activities with the 1/2400th 'overseas' set up circa 1910 -1914 I had occasion to drag out all the material I have amassed for Jutland. There is rather a lot of it!

The most surprising thing about this game is that I do not actually own a complete copy of it! I have the counters, rules, plot maps, task forces boards, time record sheets, range finders and measuring sticks but no box to put it all in! To be honest the collection is probably too big to fit in the old style box anyway....

The compilation of all the articles from the Avalon Hill General
﻿

The game featured in a number of editions of the old Avalon Hill General as well as the Boardgamer magazine and so I have copies of everything ever published by way of variants, additional rules or changes to the core system. There are also additional ship stats available including the remaining ships that saw service in the North Sea, the fleets for Russia (Baltic and Black Sea), France, Italy, Austria and Turkey). There is even a variant that exists covering the battle of Tsushima. With the Mediterranean set up there are some very useful plot maps available which is really handy as I am a huge fan of the map search system employed in the game. 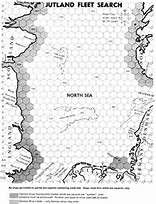 One of the plot maps. In the base game there are two pads -one for the Germans and one for the British. the maps are identical but the flip side has the ship damage record for each side.
﻿

Replacement counters for the base game as well as for all of the various other fleets and additional ships are available from a number of sources - I own those for the rest of the North Sea (those that did not feature in the original game) as well as for the nations mentioned above which means that there is a lot of potential away from the traditional theatre of operations.

The rule system for this game is designed to be quick and to fit within the context of the strategic map movement. In this is does the job admirably however, as a standalone set of naval rules they are a little on the 'light' side. If you add all of the rules additions in from the magazines the game plays in a more satisfying way but I think there is still room for some TLC in a couple of areas. Bearing in the mind the rules are designed for fleet actions between dreadnoughts the ships at the smaller end of the scale (light cruisers and destroyers - lumped into a generic 'light ships' category) are poorly served. To use the rules as they are then for the kind of action I envisage fighting (roughly around 6 to 12 ships a side) would be a little on the light side so some more detail would need to factored in. One has to be careful adjusting a set of rules so as not to unbalance  them or lose the author's intended flavour but I am confident that with the help of all the additional written material available - including the designer's (Jim Dunnigan) original notes this can be tackled sympathetically.

That is what I am going to do - essentially to pick up what I was trying to do 18 months ago but did not finish.
Posted by David Crook at 10:18

Just seen there's a pdf copy of this and all the extras on evilbay! Might dip my toes in...

You are in for a treat then for sure! Two of the best articles are the one by James Dunnigan about his design process for the game and the second was about the hit distribution on SMS Derfflinger. There are a lot of optional rules to include which makes for a more rounded game. I have a few ideas of my own that I will add to the mix as well.

Look forward to it.

I am getting that Ground Hog day feeling David!