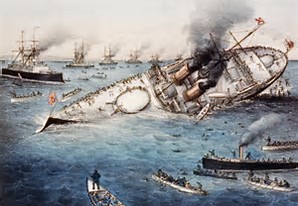 One wonders how history would have played out had a certain Commander Jellicoe not escaped from the sinking H.M.S. Victoria
﻿
You know that feeling you get when you think you have something virtually sewn up and then something crawls out of the woodwork and proceeds to unstitch pretty much everything you have done so far?  Well that is what has happened.
I was typing a few notes up on the Mac last night when I happened to browse an old folder of files called Wargame Rules. This is the folder that includes a vast number of downloaded rules for land battles for various periods. At least that is what I thought was in it. As I idly scanned down the list of files (with some real corkers there that will need revisiting at some point) imagine then my surprise when I came across some old files relating to Jutland. These files are at least seven years old, probably longer, and represent a fairly comprehensive revision to the Jutland rules incorporating all the various updates from the AH General and Boardgamer magazines and some additional items from yours truly.
In short, pretty much everything I have been wittering on about recently….
I thought I had moved all of my Jutland related files into the Jutland folder but somehow had not done so with these. In my defence I have also changed computers twice since these were created so that is possibly how they have fallen through the gaps.
As well as the revision to the rules I had even gone as far as drawing up fairly comprehensive ship damage charts for both the Royal Navy and the High Seas Fleet.
In truth I had completely forgotten about these revisions and am more than a little embarrassed at myself for having overlooked them. Had I not done so it would have saved me a lot of time.
A cursory glance has shown that I was on the right track with my recent thinking so I will make a point of harmonising the files into something approaching a system so I can get a definitive draft prepared. I will make this available in due course but for now I need to tidy things up and make a mental note to be a little more careful where and how I store things....
﻿
Posted by David Crook at 15:23

David, while you may be making two steps forward and three back, at least you FOUND the older iterations of your work. I have work that I KNOW I worked on but cannot find anywhere. Some times, the wheel must be reinvented. I envy your rediscovery.

At the expense of possibly telling the obvious, between this list at grognards.com:
http://grognard.com/indexes/j4.html

and this trove of scanned general issues:
http://www.vftt.co.uk/ah_mags.asp?ProdID=PDF_Gen

you can find discussion by Dunnigan himself on his "system."

I admit to only playing part of Jutland once (when I was 13), but recently ran a game of Fletcher-Pratt and became enthralled. So, I look forward to your adventures. Best,Steve

I was actually chuckling to myself about this on the way home but as you rightly say at least I found them. I am pleased because it puts everything I have done recently into context and for the most part all of the recent work mirrors the older stuff so I can take comfort that at least my thinking has been consistent!

Many thanks for the links - they are much appreciated. I have an inordinate amount of material about the game including some stuff from Jim Dunnigan himself but it will be useful to compare lists. I like the link to the General as this is a good source for many other games as well.

You are on a roll David
PS I never trusted Macs
I think it hid those files from you ;)

I must confess to feeling slightly foolish but alls well and all that. I actually seldom use the Mac these days so can’t really blame it but at least the material is now back in the public domain so to speak.