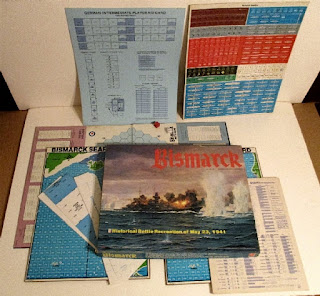 The first (and rather more worn) copy of the Avalon Hill game Bismarck has arrived and so I spent some time yesterday evening sorting through the contents. the counters are primarily unpunched although there are four missing - which I knew about beforehand. The missing counters are two British air assets and a couple of search board Royal Navy ships. I have yet to identify them definitively but at first glance they seem to be very much in the minor character vein as all the main protagonists appear to be in place. The second copy of the game (which is still en route) is in far better condition and is complete with all the counters intact and unpunched. Owning two sets of the game is not what I would usually do but having spares will be useful and certainly the extra measuring devices and damage pad will be very handy. 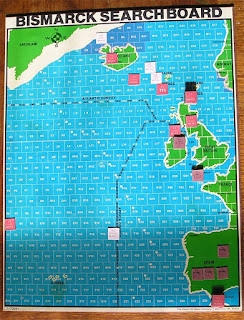 One of the search boards. There was an expansion to this that included the South Atlantic and was designed for the Hunting of the Graf Spee.

I owned a copy of this game in the early 1980s and had forgotten just how much material is crammed into the box. It is not as packed as that for Flat Top but is still pretty hefty. Aside from the two mounted search boards there is a fold out mounted battle board, copious charts and tables and several range measuring and movement devices. I had also forgotten about how congested - some might say indigestible - the rules are. There is a basic game, an intermediate and advanced version with the latter resolving the battles on a table top in the same way as a conventional miniatures set, rather like Jutland. I must confess that I winced when I looked at the advanced rules which appear rather more complex than I would like but that is how I roll these days as I prefer simpler mechanics for my naval games. In fact the intermediate level game seems to hit the sweet spot but I will need to reacquaint myself more fully with the rules before making any decisions.

I also took delivery of the remaining 1:4800th ships for use with the above boardgame from MY Miniatures. I now have two fleets for the North Atlantic and beyond and as a result of the extremely fast service from Mr Yarrow, the proprietor, was finally able to order in the bases to start work with them this morning.

I also spent some time yesterday looking over the models and seeing how they looked. GHQ they are not but they are recognisable as what they should be which is the main thing. Detail wise I would say they are very much on par with early Navwar style castings. I have been generous with the base sizes for the models so I can revert to my usual font size (12) for the name labels and the customary ensign. All the bases will be 25 mm wide with the lengths being either 70 mm, 60 mm or 50 mm. This is for capital ships, cruisers and destroyers respectively.

I will be employing my usual black undercoat and dry brushed shades of grey with blocked in decks where appropriate technique but am conscious of two things. I need to use lighter shades than I have in the past and this also applies to the sea colour.

Naturally there will be pictures in due course.
Posted by David Crook at 10:35