With Lawrence in the Desert....(and a question)

As anyone that knows me will confirm, my capacity for U turns is legendary. I always set out with the best of intentions but as sure as eggs are eggs something will come along to derail whatever it is that is the current flavour of the month. In my defence it is safe to say that invariably what tends to happen is that the derailed project eventually resurfaces for a while and then recedes politely back into the subconscious, only to reappear yet again at a later date. This has been a familiar and depressing pattern for me for many years now! In truth though, I have only really abandoned a few ideas so what is left is a rather large bucket list of potential projects that fade in and out of vogue with monotonous regularity.

So it is with the Arab Revolt.

I have invested a lot of time, effort and interest in the Arab Revolt for many, many years now but for a variety of reasons it has never really taken off from a gaming perspective. Like an old friend, David Lean’s epic film Lawrence of Arabia always inspires me and reading The Seven Pillars of Wisdom for the umpteenth time is guaranteed to get my creative juices going, that and an irrational liking for Rolls Royce armoured cars.  I have my own thoughts on what the Arab Revolt should look like on the table top and am comfortable that if all the pieces were in place I could make a really good fist of it. For a variety of reasons though, all the pieces have never seemed to be in the same space and time and so I have yet to bridge the gap between project and reality but you know what? I have a funny feeling this may be about to change! 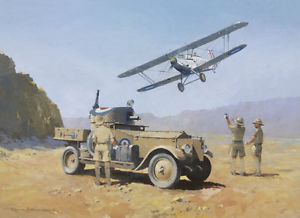 A Rolls Royce armoured car with RAF markings  being 'buzzed' by a Hawker Hart. Whilst not set during the Great War it is still a very evocative picture.

You know what it is like. You look long and hard at something and start looking at what is available and from whom. In my experience many projects fall flat on their face at this point as it seems to be an unwritten rule that at least one part of what is needed is usually unavailable. I may be a overly picky in this respect but I tend to prefer sourcing figures from a single manufacturer rather than ‘mixing and matching’. It has held me back for sure but it is something I prefer to keep to if I can.

Irregular Miniatures now produce a range of 15mm WW1 Turks. There, I said it. They also produce some rather nice ranges of Arabs types including cavalry, camelry, infantry, civilians and much else besides. They do not (at present) produce a Rolls Royce armoured car; nor do they have any WW1 British infantry in their tropical uniform. However, and I suppose I am mellowing with age, what is available would be more than enough to be able to raise a couple of Portable Wargame style armies.

So what does this all mean? Well, something will have to give if I am to raise these forces and so, after much thought, I have decided that the French Foreign Legion will need to stand down. As much as I really enjoy the adventures of La Legion the Arab Revolt will always top it in my interests. The biggest single advantage though, is that I can make use of the Turks to fight the Russians and the British (Greeks as well if needs be) and the Arabs to fight pretty much anybody. It also gives me an excuse to make some ships for the Red Sea as well as adding a few of the aforementioned Rolls Royce armoured cars.

On a totally different subject does anybody have any information about the Russian army of around 1710? There is something in the offing that has prompted the question so all will be revealed in due course. Suffice it to say that my hankering for something 18th century-ish may well be realised in a way I could not have possibly imagined….

No such problem in 28mm David. Very nice Ist Corps RR Armoured Car that I use for VBCW. This is, of course, my passable impersonation of a drug dealer!

On the Russians, here is my army, done of course for the Ottoman wars

In addition to the Ospreys I mention there is Christopher Duffy's 'Russia's Military Way to the West', which is very good.

If you need anything specific, happy to scan a few pages.

That is very helpful as the Russians for around 1710 would be ideal opposition for something I shall be acquiring in due course. I shall need to paint them in a very old school way for reasons that will become obvious in due course.

I seem to recall reading the Duffy title many years ago so I shall keep a weather eye open for it although I suspect it will be expensive.

Many thanks for your offer - I may well take you up on it!

On camel, on horse and on foot
And they can double for SAS in the Western Desert in WWII

There I said it (again)!

I looked long and hard at them but have instead opted for 15mm - courtesy of Irregular Miniatures. I have even tracked down a source of Rolls Royce Armoured Cars....