First steps into the North Atlantic 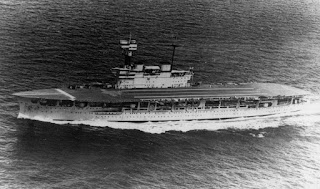 I spent the evening sorting out the models I needed for phase one of the North Atlantic project and those that are currently being reserved for phase 2. The number of ships that I did not need at this stage was quite modest but these have now been safely tucked away for later use. The cast list for the North Atlantic via the Bismarck board game will be cleaned up, based and undercoated by the close of play Sunday so the real work can begin next week. The only issue I have at present is in respect of painting them at the moment is acquiring some lighter shades of grey paint. I prefer using paint colours straight from the tin/pot rather than mixing shades as I never manage to replicate it at a later date! I am going for overall grey with decking painted where applicable. I am not bothering with camouflage schemes as the models are so basic you would not really get the benefit of although if I were using C in C or Shapeways I might be more inclined to have a go. As ever my usual ‘waves, wakes, names and flags’ basing technique will be used so I will need to ensure that I have the correct ship names ready to be printed. I have plenty of ensigns for the bases in any event. 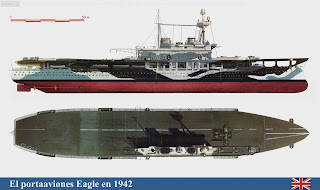 A rather nice rendering of her in her 1942 camouflage scheme.

I have everything I need in respect of the Germans but there are a couple of omissions from the Royal Navy. The largest ship is the aircraft carrier HMS Eagle. Although not directly involved in the hunt for the Bismarck she was quite active searching in the South Atlantic for the numerous German supply ships that supported the German operation.  As well as the aircraft carrier I am also missing representatives of the following cruiser types – Dido, Arethusa and ‘C’ class. Of these the latter is a minor problem in that MY Miniatures do not make one so I will need to convert something or do without. The County class cruiser HMS London is also absent, at least in her refitted Colony Class style configuration. I could use a conventional County Class model as is and to be honest, in 1:4800 it hardly matters. I may see about a conversion but it is not a major priority at present.

I need to track down a copy of the Axis and Allies: War at Sea expanded rules and ship data that I had downloaded and printed a couple of years ago. I am sure I still have a printed copy of this somewhere in the man cave and probably a digital version saved somewhere. I also need to extract the intermediate game combat rules from the Bismarck board game and get them typed up. The game contains damage record charts so I will not need to draw any of these  up – especially as I have two pads worth of them! With these two sets of rules add the set from Barry Carter I will have the choice of three sets of gridded naval rules to think about.

The more I think about it in the short term the more I am thinking that using my laminated Axis and Allies: War at Sea playing mats would be a good idea. They are readily available to use but the laminate is very shiny and unforgiving when used under artificial lighting or camera flash. I am sure I will cope with this somehow.

Within the scale I have chosen for my WW2 naval adventures I fully intend tackling the Mediterranean theatre and also the Pacific in due course. In both cases I am looking at no later than 1942 as the latter gets a tad one-sided as the war progresses. There is also the possibility of the Great War in this scale and this is something I would readily embrace especially as MY Miniatures produce the main bulk of what would be needed for the fleets at Jutland – especially if I go down the ‘replacing the counters with models’ route as I am currently doing so with the Bismarck board game.

This is getting interesting

I certainly hope so - as ever my progress will feature on the blog so you can read all about it!