WW2 via versions of Axis and Allies 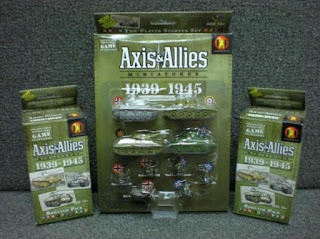 One of the starter sets for Axis and Allies Miniatures with a couple of booster sets. The range expanded to cover the early war period as well as the desert and Eastern front as well as the elements of the Pacific.

One of the main reasons for me acquiring numerous copies various versions of the Axis and Allies board game is the vast quantity of usable material contained therein. I have already mentioned the ships were to have formed the cornerstone of my current WW2 naval project – sadly no longer but I have a couple of other ideas for them - but there is much else besides. The vehicles are roughly 1:300/1:285th and if you are not over fussy about the level of detail would be perfectly usable for a set up in that scale. Indeed, one of the things I discovered early on is that the Tumbling Dice 1:600th scale infantry measure roughly 5mm tall and look quite comfortable alongside the plastic vehicles. I have plans for these at some point. There is also a lot of infantry scaled at roughly 20mm – I say roughly as they on the small side – and these are very much generic examples from each nationality. My only gripe is that the British infantry figure is wearing 8th army shorts. The German infantry figure is wearing what I would call the generic Hollywood early war uniform with jackboots. I fully intend painting these up in traditional field grey for Europe and also for the Afrika Korps. There are certainly enough figures to do this!

I placed a couple of the figures alongside the recently acquired North African Village set which is scaled at 15mm and they are perfectly at ease alongside them. This is very handy as it ticks a large box in my project list. There are some other pieces available from Flames of War for the desert which, whilst a little on the pricey side (as pre-painted kit tends to be in my experience), has the advantage of being ready to use straight from the box. Ordinarily I would shy away from this type of product but given that he village set cost me next to nothing I can afford to invest in a few pricier pieces. 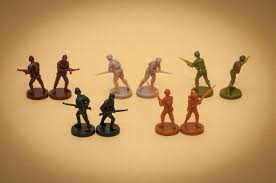 The 20 mm plastic infantry figures that come with the Axis and Allies strategic board game. From the top left there are Russian, British and American figures with the Germans and Japanese featuring on the bottom row.

I have a lot of the Axis and Allies infantry all of which are in variations of an advancing pose with the weapon held at varying angles depending on the nationality. The quantity I own for each of the main combatant nations is more than sufficient for my needs which is just as well as I will not be investing in any other figures for the project. I am going to use the technique employed by Memoir ’44 whereby infantry support weapons (and I am thinking of the expansion sets rather than the base game) are represented by a generic model placed with the unit to signify its presence. Being mindful of aesthetic sensibilities as I am, ahem, I will place a model MG, mortar or Infantry anti-tank weapon with the unit when needed. Should I need to deploy them in their own right as a separate unit then I would merely assign a couple of infantry figures to the model as a crew. Similarly I will also assign a couple of infantry figures as crew to artillery or anti-tank guns. All this will be in 20 mm BUT, I shall be taking a leaf out of the Zvezda Art of War Operation Barbarossa game and using 15 mm for vehicles.

My decision to use 15 mm was influenced primarily by the table footprint of 20 mm models. As the games I shall be playing will vary in terms of the scale of the action being represented (rather like memoir ’44) it makes sense to have models that occupy as small an area as possible. As I am using a 3” square as my grid size of choice having smaller vehicle models looks better for my particular set up. I will also be able to make use of the Axis and Allies Miniatures game map sheets I have - you may recall the laminated versions that featured in a previous post - which are hexagonal. When the game was available the figures and vehicles were also 15 mm.

The somewhat relaxed approach to this particular project is solely because I am essentially up-scaling Memoir ’44 so producing a vast array of historically appropriate equipment and models is not really necessary for a good game. Not for everyone I know but it works for me and how I want to game the period.