A vinyl Axis and Allies: War at Sea mat available from Gale Force 9. Mine is the original paper version although it has been laminated.

Whilst reviewing the contents of my recently acquired copies of Bismarck by Avalon Hill I made a rather pleasant discovery. The game includes counters for all the historical opponents and also the ‘never made it but could have - potentially’ types. The models I have acquired from MY Miniatures in 1:4800 on what was largely a best guess from memory of the composition of both the British and German forces, is largely correct although I am missing a couple of RN cruiser types. To be fair it would not be difficult to remember the composition of the German force for this particular operation! The British cruiser shortfall will be easily rectified once Mr Yarrow is back from his holiday.

There are some ships I have ordered that did not feature in the expanded order of battle in the Avalon Hill game but will nevertheless be useful elsewhere. We are not talking about many models at this stage but the plan is to leave off painting them for the time being until I get to the Mediterranean – which will then mean, of course, adding the Italians.

In respect of the aerial dimension for this project I fully intend using models in due course but for the time being I have a rather large selection of cardboard counters depicting most of the worlds WW2 naval aircraft. These came courtesy of Victory at Sea – the rules that used to be available from Mongoose Publishing. I have a rather novel idea in mind for ‘basing’ these counters so as to give them the impression of being in flight – more of which in due course.

Another part of this project will be getting a 3” square gridded playing surface prepared for use, primarily with Barry Carter’s Naval Wargame Rules in mind although this will also be handy for a few other projects I have in mind. I have a couple of options to experiment with in regards to materials and the all important colour scheme and so am as yet undecided as to how best to tackle this. However, in the short term and in the absence of anything readily prepared I have a laminated set of the Axis and Allies: War at Sea playing mats which, despite having an offset square grid, would be ideal to use the 1:4800th collection with. 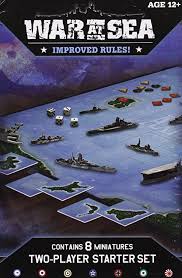 This was the second edition starter set. Additional models were available in booster packs. There is a healthy secondary market in single models - the ships are 1:1800 and the aircraft are 1:900th - and prices have been creeping steadily higher

As an alternative to Barry Carter's Naval Wargames there are a number of other grid based rule sets I could use. To begin  I could even use one of the numerous – and readily available - Axis and Allies: War at Sea rule variants. The basic Axis and Allies naval rules were great fun to play and gave some memorable games at the club but were a little on the light side. Many of the rule amendments I have seen are ‘add-ons’ to a lesser or greater extent which obviously adds to the complexity of the rules. It is certainly something to think about though. There is a final option in that I could also easily use the intermediate combat rules from the Bismarck game itself. Although these are designed for use on the hexed battle board that comes with the game there is no reason why the Axis and Allies offset square grid could not be used as a substitute. this would of course have the advantage of seamlessly fitting into the board game as a whole because in effect, I would be fighting a board game but using miniatures

My immediate priority though, is to get the ships finished so I can then run a North Atlantic style breakout scenario with the Germans having some extra firepower. I will use the Bismarck search boards for the map movement and the appropriate playing surface for the tabletop actions as and when they arise.

This will be the main focus of my efforts for the next couple of months and do you know what? I am really excited about this!