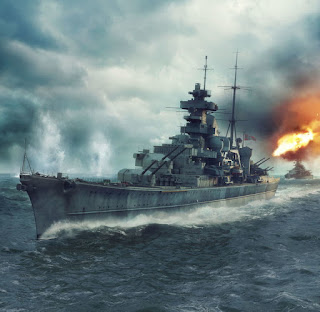 KM Prinz Eugen in action - I suspect there are no prizes for guessing the identity of the large grey mountain following in her wake!

It has been a busy weekend but I have managed to make a good start on the ships for the North Atlantic project. For the first time I made use of my ‘portable wargame painting/modelling table’ which was deployed in the lounge by the patio windows. The first order of business was to sort out what was needed and what could be parked for the time being. I had already worked out what else I needed so for the most part it was culling those ships that did not feature in the Bismarck board game. After having done that it was the cleaning up.

The 1:4800th ships are the old Leicester Micro Models range and as such are a few years old. The detail varies and as I have said previously I am reckon they are on par with first generation Navwar. Having said that the moulds have probably seen better days in some cases as certain ships needed quite a bit of cleaning up. It was nothing that a couple of files, a scalpel and brute force could not put right but it did take some time. My plan originally was to clean them up and then base them prior to painting but I have had a change of heart in this regard because some of the models (HMS Hood I am looking at you!) have a very low freeboard and I can foresee problems painting the sea up to the model - which is what I normally do. I am going to paint the bases before fixing the ships on to them. This will mean rigging up some kind of jig for the ships but I think given the size of the models it is the right call to make. 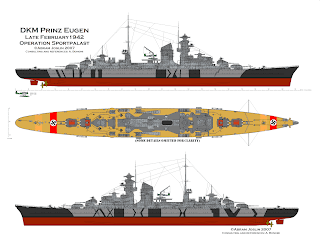 Plan views of Prinz Eugen sporting a 1942 camouflage scheme. At the risk of being boring I shall be using an overall grey paint scheme for the 1:4800th collection.

There were a few models that have proven to be beyond saving in terms of rogue castings so these will need replacing. The worst offender here is without a doubt the Prinz Eugen. I ordered three of these and even the one that was OK was fairly crude but the other two came out very badly cast so will need replacing. There was only one mistake in the order but needless to say it was of a fairly crucial ship. I ordered two Scharnhorsts but one of them was of Gneisenau (her sister ship) with her projected refit of six 15” guns. I will keep this but will need to get her in the original configuration.

Overall the models are OK and it is only when one looks up close that these issues surface. Once they have been painted they will look fine. I am really excited about the potential of this range and as long as one is prepared for a little work in terms of preparation they are absolutely fine.

The one point I will emphasise though is that the service from MY Miniatures is really top drawer and the fact that he is persevering with this range, despite the age related problems, is certainly to be commended.
Posted by David Crook at 21:39

Glad to see that you are beavering away on this project. Hopefully, some will be camera-ready soon!

I am not expecting the models to take too long to be table (and picture) ready and there will be some camera shots in due course. It took me rather a long time to sort and ready the models for the reasons mentioned but I am now set for painting which will be started next weekend allowing for organising a jig for the ships. I will be able to work on the bases though which will mean making sure I have the correct name labels printed.

Good to hear from you.

A naval game at CoW perhaps?