One of the great things about our hobby is the opportunity to try new things out on the table top. In fact it is safe to say that a very high percentage of our games are hypothetical scenarios - these are the grist to the wargamer's mill. Occasionally history provides us with sufficient tools to be able to extrapolate a given event beyond that which actually took place. The North Atlantic in 1941 is a very good example of this. 
Operation Rheinubung, the German sortie into the Atlantic intended to ravage the convoy routes, could have put to sea as a far larger force were it not for the repair and maintenance being carried out on the battle cruisers Scharnhorst and Gneisenau. The Bismarck's sister ship, Tirpitz was not quite ready for operations (although her captain offered to take her in support) and the only remaining light cruisers the Kriegsmarine still possessed did not have the required range of action. So it was left to Bismarck and the Prinz Eugen to face the Royal Navy with the well known end result.

There is a big 'what if?' in that supposing the other German units were ready for use the force that could have sailed would have given the Royal Navy a real challenge especially if - and this is taking the whole 'what if?' to another level - the German task force had the support of an aircraft carrier.

The Graf Zeppelin never made it into service but it is fascinating to speculate what impact she would have had had she done so. Originally intended to carry a selection of navalised JU 87 dive bombers and Me 109 fighters as well as Fi 167 biplane torpedo bombers the Graf Zeppelin would have possessed a limited strike capacity more in keeping to the Royal Navy practise rather than the US or Japanese. 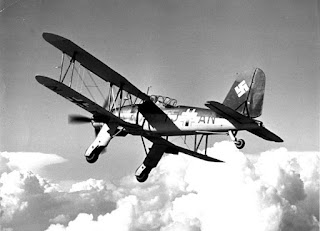 Of the Stuka little need be said but the Fi 167 was a very interesting idea although it was never produced in great numbers especially when work on the Graf Zeppelin was suspended. Rather like the more famous Fi 156 Storch the Fi 167 had fantastic low speed handling characteristics making it ideal for carrier operations. In 1944 one of these whilst serving in the Croatian Air Force had the distinction of shooting down US P51 Mustang although it was shot down in the process. The naval version of the Me 109 (actually the Bf series) designated 'T' carried out flight training on a short runway airfield in Norway that was known for high cross winds, similar to what one would expect on an aircraft carrier at sea. Sadly when work resumed later in the war on the Graf Zeppelin the Bf 109 T (based on the E series) was outdated by newer types. In 1941 had they been deployed in their intended role would have been more than adequate for a Combat Air Patrol although the perennial problems of take off and landing problems associated with the type due to its very narrow wheel track would have only been worsened on a heaving flight deck!

A further consideration for both the historical and a hypothetical operation is the supply efforts the German put in place to keep the task force at sea. There were 9 support ships tasked with refuelling and re-provisioning the German raiders all of which were easy meat when found - the Royal Navy accounted for 7 out of the 9 deployed - but again, finding them used up a lot of ships covering a wide area, ships that could have used elsewhere.

The Avalon Hill board game includes details for all of the ships mentioned above (even for the German supply ships) and so with the 1:4800th model collection (which includes a model of the Graf Zeppelin) I fully intend exploring this most tantalising of 'what ifs?'

I have not even begun to consider the US option yet - one for another day methinks.
Posted by David Crook at 11:25

The 109s would have a field day until they landed and wrecked their undercarriage....

The FW 190 would have been a better option in my opinion but then I am probably biased as it is my favourite German fighter.