Being Mostly Back in the North Atlantic.... 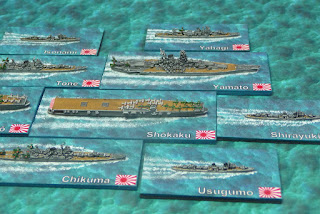 1:4800th scale WW2 Japanese produced by Shapeways. These are superbly detailed models (note the aircraft on the flight deck of the carrier) but are not cheap. then again, compared to MY Miniatures very little is!

It has been a busy few weeks since my birthday at the end of last month (28/09). We seem to have had a lot of things going at home and so my dedicated home based hobby time has been a little restricted. I say home based as this is where the painting and gaming take place - my commute to and from work is spent reading and researching so I am still making progress albeit in a different direction.

This weekend sees what passes for normality in our house in that SWMBO will be at work tomorrow afternoon (she works alternate Fridays and Saturdays) as will my son. He is currently working 6 days a week - he is a self-employed electrician - and doing rather well. Finally my daughter is back at university (in Reading) so it means that for five glorious hours I will have the house to myself.

I have a couple of things to take care of on the domestic front but for the most part I will finally be able to get down to some painting. 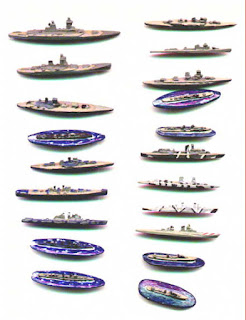 I came across the above picture of some painted Leicester Micro Models 1:4800th scale warships (now produced by MY Miniatures) and a copy of the catalogue from the late 1970s. Compared to Shapeways and C in C these are very basic by comparison but manage to capture the profile of the ships represented rather nicely. Crucially they are also very modestly priced compared to the others at 40p per item for all but the largest vessels.

I have the last of the models from MY Miniatures for the 1:4800th scale WW2 North Atlantic project - if you recall this is based on the Avalon Hill board game Bismarck - so will be basing and undercoating them. I will also need to make sure that I have the appropriate name labels so I will need to spend some time on the Mac as well. I know I have most of these but it will be easy enough to print out a fresh sheet. I also have sufficient ensigns as well although I will probably need to get some more Royal Navy types for when I venture into the Mediterranean.

I am feeling pretty positive about my projects at the moment as for the most immediate ones I have everything I need to tackle them. I have all the figures I need for the WW1 Arab Revolt in 15mm for the Portable Wargame, I have all the Spencer Smith 30mm ACWs for the Kurz and Allison project as well as everything for OGRE.

When I say everything I should qualify that by saying I have everything I need for the first phase which would be more than enough for gaming purposes. The Arab Revolt will need some armoured cars and possibly some French mountain artillery. Some tropical service uniformed British specialists would be useful - I am thinking machine guns and similar - so I will keep an eye out for some. Apart from the armoured cars none of this is really urgent and indeed, even the cars are not really compulsory.

For the Kurz and Allison collection the only other thing I need would be some ships but again, these are not essential in the short term and as they are being scratch built will form a side project in any event.

That is the plan then and I only hope I can stick with it - Cruel Seas by warlord games not withstanding....

Those are VERY nice. How do you prep and paint the Shapeways models? My experience with 1/100 scale airplanes has been somewhat discouraging. Also, who made the bases? I know they are top down views, but don't remember the manufacturer.

Sadly they are not my models - I found the image on the net - but I put the picture up to show the incredible detail that Shapeways can get in this scale.

I am not sure what you mean about the bases - can you clarify for me please?

David,
I was talking about the fact that the ships are on bases that have a wake, the name of the ship and a national flag printed on them. After doing some looking on my own, I discovered that they are made by a company called Topside Minis.

I am with you now! For models I paint the waves and wakes and print the ship name onto a self adhesive label and then add it to the base. The national flags are printed for me which finishes the model off nicely.

I have looked at Topside Minis and they are certainly very nice.

I'm working part time now after 25 years of 5 days a week plus weekend jobs. Makes all the difference to shifting projects forward!

Trouble is I do not have enough hours inthe day to tackle them all - at least not for a while anyway!