The Return of the 'Desert-Loving Englishman' 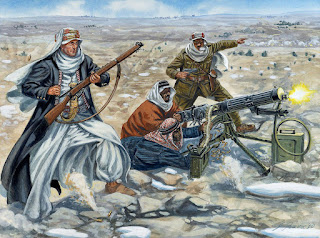 A rather dramatic scene from somewhere in the desert - not sure what the Vickers gunner is shooting at though!

The first batch of figures have arrived from Irregular Miniatures for the WW1 Arab Revolt project. The Turks are very nice indeed although the horses for the cavalry need a fair amount of cleaning up – primarily flash so nothing serious. I needed to order some additional figures just to round off the organisation which will be as follows:

The Arabs were slightly more problematic in this regard and so I need to order slightly more additional figures. The organisation is as follows:

I will also be adding to this three Rolls Royce Armoured Cars, possibly some machine guns assuming I can source suitable figures and some French mountain artillery, again when I have some more details.

The above collection is designed very much with the Portable Wargame in mind and so it can be seen that one can raise some very representative forces that are quite modest in size (and cost). Taking the collection forward I have in mind some Russian opposition for the Caucasus Front as well as the French Foreign Legion in due course. Both of these forces will be of a similar size to the above.

On a different tack the last of the 1:4800th scale WW2 ships for the North Atlantic have arrived which means that work can begin in earnest on this project. The plan is to have all the models finished for this completed by the end of the year so that work can then commence on the Kurz and Allison Spencer Smith ACW project which will also include some scratch built ships for good measure.

I had some 15mm RCW figures by Peter Pig for a while.

There was an armoured car in there, not a Rolls Royce though.

Worth checking them out.

I have tracked down a few sources of 15mm Rolls Royce Armoured Cars including Minifigs from their WW1 range. They are also quite easy to come by in resin so that is another avenue I may explore.

I take it that the RCW is not one that floats your wargaming boat any longer then?

The RCW collection was part of my clearout project.

I got a very good price for them, more than I paid for them by a good margin.

That is always a bonus!

They will make a change from grey that's for sure!

Looking forward to seeing these painted up! I had some Irregular pathan figures years ago..very nicely done and with bags of character. I wish Peter Pig dud figures for the Arab Revolt!

They are rather nice figures and will paint up well. I have put them to one side for the moment though as I want to tackle the Spencer Smith project once the WW2 ships are finished.