Back in the ACW Groove….Almost! 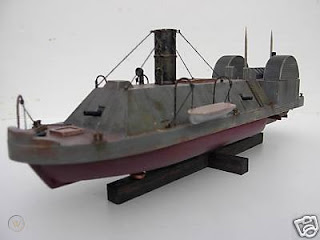 A rather splendid model of the C.S.S. Baltic - rest assured that my version will not be quite so aesthetically pleasing!
After a few weeks of, how shall I put it, distraction, it was good to finally get back to looking at the ACW ships once again. So I sat down and picked up the models, got the paint and glue out, stuck a few bits and pieces in place and readied myself for some brushwork when I remembered that I needed to seal the MDF on two of them.
That is when the problem occurred - my trusty tin of Rustin’s MDF sealer had dried up! To be fair there was on only a small amount left at the bottom of the tin but I thought there would be enough for the task in hand. It was mildly irritating for sure but a replacement has been ordered but in any event the other models could be worked on in the interim. I was able to get a reasonable amount done in the time available but more importantly it felt great to be back in the ship building business!
One of the things that struck me whilst doing this is that some of my earlier Confederate casemate ironclads are no longer up to the build standard of the later models. With this in mind I have decided to retire them - actually they will probably get repurposed into something else although I am unsure at this stage as to what. Ironically this means that I will need to build a couple of additional ships for the rebels to make up their numbers.
When I first started the ACW project the models were intended to be generic ‘based upon’ representations of typical ships of the period. For the most part I have stuck to this but for the Confederates the ironclads morphed into more historical types as evidenced but the models of the C.S.S. Virginia, Manassas, Georgia, Arkansas, Louisiana and Missouri. I plan to add another two or three models for this part of the Confederate fleet and aside from the one you see above I have yet to decide on the others.
Meanwhile, aside from the examples of play that I need to finalise, the final draft of the rules is pretty much complete. I hope to get these dialled in over the next week or so and the end result will then be sent off to the trusty playtesting dynamic duo - assuming they have not dies of boredom waiting on me that is!
In Other News….
We had a family day out shopping today during which I was able to make a brief visit to our nearest branch of Hobbycraft. I will not go into details but suffice it to say some bits and pieces were obtained that will be used in the future….literally, that is….
Posted by David Crook at 22:38

The Confederate casements could be converted to Union mortar rafts for sieges and thus become targets as opposed to combatants.

I have something in mind that may be work but for now I shall merely put them to one side for the time being.

She is an interesting looking ship for sure! I am looking forward to building her - the overall look is all about getting the proportions right - and the other Confederate casemate ironclads (I said two or three, it is now looking like three or five!). First of all though, I need to finish the existing batch of gunboats etc.

I shall look forward to your upgrades David. I think we all have the temptation at times when re-visitng projects to almost start again. I know it has happened to me over the years!

I must admit I did have a degree of trepidation about where this particular rabbit hole would lead but it is actually not as bad as I originally thought. I shall be retiring 6 models and building 5 as replacements which is not too onerous. There is a fair amount of minor detailing to attend to - for example I need to add guns to a number of ships and I also need to replace a couple of pilot houses. All in all it is not a massive undertaking as such but will be worth it to have the collection at what I would class as a uniform standard of build.

David - have you read/played IRONCLADS OF THE AMERICAN CIVIL WAR: A SOLITAIRE WARGAME by Patrick Rael? Solitaire wargame books seem to be rather en vogue at the moment. I ordered a copy from Amazon, but haven’t had chance to play it yet. The Amazon review is rather positive.

I have seen it and it is on my ‘to get’ list for sure! I will be keen to find out what your thoughts are once you have had a chance to have a go at it.

From what I have seen it looks pretty good.