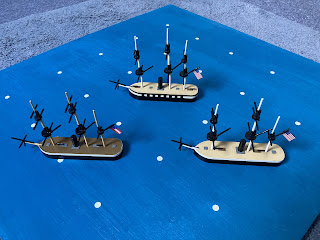 The combatants - at the top the frigate the U.S.S. John Adams, below the two sloops the C.S.S. Tara (left) and the U.S.S. Slattery (right)
Somewhere in the Gulf of Mexico, a day south of Mobile Bay….
Captain Butler, commander of the Confederate commerce raider the C.S.S. Tara, surveyed the two rapidly approaching Yankee vessels with trepidation. His ship had been racing along under full sail, bound for Mobile Bay, until earlier in the day when it dropped away to little more than a breeze. Initially this was not a problem as he had planned to make the run into Mobile under cover of darkness so as to avoid any patrolling Yankees. That plan had been scuppered by the appearance of a pair of Yankee warships - a frigate and a sloop by the look of it - and so he ordered the engines started and full steam ahead.
It was not long before not one but two problems arose. To begin with his chief engineer informed him that the remaining supply of coal in the bunkers was dangerously low - there would be sufficient to get to Mobile but that would be about it - and that any attempt to out run the Yankees would deplete it entirely. The second problem was that the shortest route into Mobile from their current position would mean having to break through the Yankee patrol lines in broad daylight - right across the path of the approaching  enemy ships.
Captain Butler pondered his limited options. It was a big risk but if he could slow one or preferably both of the oncoming enemy ships he could then make straight for the extensive defences at Mobile. He was confident that the C.S.S. Tara could outmanoeuvre the frigate but the sloop would be a different matter. Taking on two ships would be a risk but he was confident in his ship, his crew and more importantly, his gunnery. The approaching enemy formation - line ahead - was better for sailing than for fighting and so he reasoned that the C.S.S. Tara should be able to get her blows in first. With his decision made he ordered the guns manned and the helm put hard over. 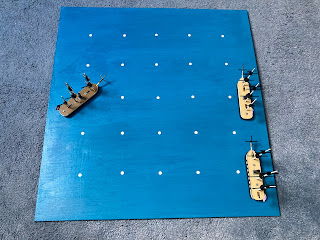 Starting positions.
Captain Wilkerson, commander of the sloop the U.S.S. Slattery, had spotted the Rebel raider heading towards the north east and had immediately deduced where she was heading. A quick exchange of signals with the closely following frigate, the U.S.S. John Adams, meant that both Union warships were now heading on an intercept course with the enemy raider. Captain Wilkerson fully expected the rebel ship to run before them which would lead her straight into the path of other friendly patrolling ships. He felt confident that the Confederate ship was heading into a trap.
Neither Captain Wilkerson, nor the commander of the U.S.S. John Adams, were quite prepared for what happened next….
Action in the Gulf of Mexico
Overview
I wanted to fight a quick action using my newly renovated 2ft square gaming board - now with 4” squares and with models occupying two rather than just the one. I opted for the high seas rather than the rivers for the simple reason that I had the models to hand! Seriously though, battles at sea usually have the potential for more manoeuvring than the rivers so this would make a better test for the change in the rules. Besides, it would be fun to do!
The action itself will be fought tomorrow so expect the AAR on Wednesday at some point, all being well.
To be continued….
Posted by David Crook at 18:52

Looking forward to this fight. The bard and ships look great.

Hi! I like the look the ships. I have no idea what this is about though but good luck with the ships. : )

Thank you old chap - much appreciated! I had the ships to hand, the board was ready and so I thought - Why not?

I am sure quite a few games have started on the back of such a limited scale of preparation!

Thank you kindly - at this stage all I know is that a couple of Union ships are looking to take down a single Confederate raider….

We shall soon see how events unfold.

Wonderful to see your gorgeous ships at sea and ready for action!
Regards, James

Thank you kindly old chap! I am looking forward to fighting this for sure!