More Thoughts on War in the Age of Imperialism 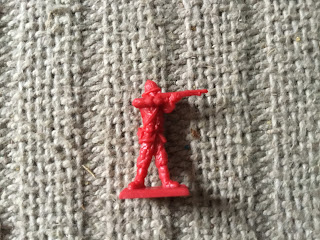 A frontal close up of the standard infantry figure…. 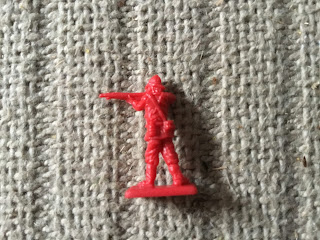 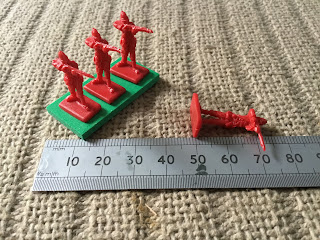 Trying out a base size - in this case 40mm by 20mm which is probably a little on the small side so I will try 50mm by 25mm next.

Whilst work has resumed on the ACW project (both the rules and the ship models) I have still found some time to further consider the whole ‘Colonial/Imagi-nations’ set up planned with the figures from the War in the Age of Imperialism board game.

My first thought was to look at other nationalities that used a close approximation of the uniform depicted by the infantry firing figure - a pith helmet, tunic, trousers with ankle boots and minimal equipment. If one is not too picky about fine detail then there are a number of choices on offer. France and Italy to start with but I am sure there are others and it is actually quite good fun researching them. It has given me a number of ideas to explore and naturally these will need to tie in with some naval activity.

In a roundabout way (roundabout as in via Bob Cordery’s World of 1891) I have been looking long and hard at the prospect of something Madasahatta based only set earlier than the famous campaign of 1914 that Eric Knowles ran. I am thinking about the mid 1880s and the period just after the invasion of Egypt and the fall of Khartoum. At this stage it is very much an idea rather than anything tangible but certainly there is plenty of scope to do this.

For now though the ACW project takes priority but it is always could to have a plan B or in my case a plan B, C, D, E and so on!

This sounds most interesting!

It is certainly giving me plenty of ideas to think about - I just need to rein in my overactive imagination a touch to make it achievable rather than just another flight of whimsy!

I think we all need to rein in our imaginations at many points in our gaming lives; I know I need to now and then!

Great to see you having lots of plans and possibilities. I look forward to seeing where this takes you…

To be honest this latest bout of whimsy is actually a previous idea resurrected with a spin on it. I certainly have much of the material I need to make it viable and the key thing is that if I can bolt on the naval dimension then it makes it personally a lot more attractive as a project. At present though it is very much about amassing the raw material and crystallising exactly what I will be doing with it all when I get to it!

My imagination has been likened to a revolving door of ideas but in this case it is more of a tradesman’s entrance into the (naval) building!

I am never usually short of ideas - it is seeing them through that is invariably a problem! In this particular case it is very much about sorting out a land based set up that supports the naval effort.

I have the ghost of an idea that just needs a degree of fine tuning to turn it into something viable.

More to follow methinks but for now it is back to the ACW!