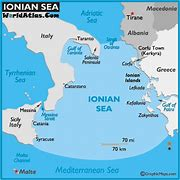 The Ionian sea and the islands therein﻿
﻿

During my recent holiday on the island of Corfu I learned a number of interesting facts about the place - facts that have given me much to think about from a gaming perspective. I was vaguely aware of the British connection with the island (and indeed, with the '7 Islands' of the Ionian sea) but not that it was in fact ruled as a protectorate for some fifty years up to 1864 complete with a Lord High Commissioner. I was also not aware of the combined Russo-Turkish occupation during the early years of the Napoleonic Wars.

The flag of the Ionian Islands. Note the lion of Venice from the days of their occupation of the islands. ﻿
﻿

Against the backdrop of the crumbling Ottoman Empire, the rise of an independent Greece and the unification of Italy the area has seen a lot of activity from any one of Britain, France, Italy, Venice, Russia, Turkey and of course, Greece herself.

The potential from a gaming perspective beyond the purely historical is pretty substantial and for me at least captures the all important naval dimension. I have been mulling this location over as a going concern since my return from Corfu and reckon there is certainly some mileage to be had from the area if one applies a little 'imagineering' to the theatre.

I am currently thinking about using this setting as the basis for an 1880s (actually around 1875 to 1885 thereby straddling the Russo Turkish war) set up with Portable Wargames armies made up from a selection of metal Spencer Smith figures. These figures, which have adorned both the internet and the written word since (in the latter case) the 1960s are very basic, crude even, but have the huge advantage of being cheap, fairly generic looking and able to be painted simply. This is a HUGE advantage for someone like me for sure!

I am sketching out a rough background to see where it goes but the basic assumption is that the British still hold the Ionian islands as a Protectorate. The Greeks want the islands but dare not challenge the British. The Turk/Albanians would also like them as well as reincorporating Greece into the Ottoman Empire. The Russians will act as a safeguard for Greece against the Turk/Albanian menace (all the while being carefully watched by Austria and being supported by Serbia) whilst the British are content to sit back and watch. Then there is the Italians who are keen to announce themselves on the international stage by reacquiring the islands formerly owned by Venice.

I have yet to flesh out the full details but this is where my thinking is headed.

Using Spencer Smith ACW Union infantry I can, with a simple paint conversion (and purists of the period look away now!), raise Russian, Serbian, Greek, Austrian and Italian infantry. the British are available from the Zulu Wars range - redcoats and all - whilst the ACW Zouave can pass muster as any amount of Turkish/Balkan types. There are a few 'specials' that may need some conversion - the main one being of course the famous Greek Evzones. 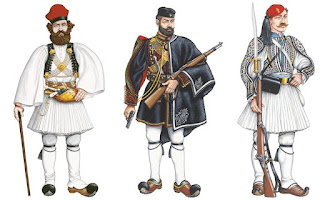 Greek Evzones wearing the famous Foustanella pleated kilt.
This idea is designed from the ground up as a Portable Wargame project and indeed, the only way I would have considered undertaking such a thing is simply down to the availability of Spencer Smith figures in metal. I am aiming for a specific look to the collection - the traditional shiny toy soldier approach - and these figures are the best way for me to achieve this.
The naval dimension will feature but as yet I have not given it too much thought.
In other news work on the WW2 ships has started again following my holiday with the plan being to get them finished by the end of the month. I have also nailed down more details for the NW Frontier although this is (and indeed always was) very much a slow burner.
Best crack on then.﻿

Most interesting information at the start of your post and exciting plans re Spencer Smith. I look forward to seeing it develop. Holidays often supply me with gaming interests. Many l can trace to my trips to Denmark in particular.
Alan

I usually come back from holiday with an idea or two but this time was unusually fruitful! Although it seems rather grandiose it breaks down into several manageable chunks which for me is important for when the enthusiasm is flagging.

I am looking forward to experimenting with the figures and also thinking about the naval side.

As my creative juices are drying up, I think that I need to go on holiday as soon as possible!

For Evzones you could convert the Napoleonic Highlander (the pleated kilt works for the fustanella) but you would have to remove the backpack. The alternative is the French grenadier in greatcoat.

I am sure another breath of sea air at some point will set you right!

It worked wonders for me - the holiday that is, with the two boat trips we took.

That is a couple of good ideas worth considering. I will not need many figures for the units in question so the conversion work will be minimal.