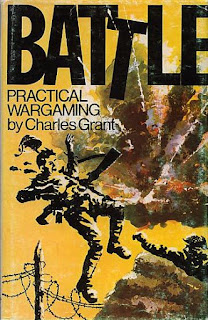 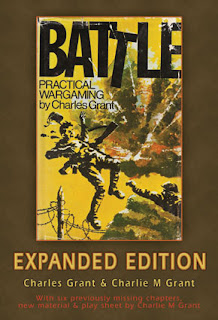 The edition currently available from Caliver books. There is a lot of additional material in this although the photo quality for the original chapters is quite poor - even in the original 1970 book they were not great!

Another of my ‘go to’ wargames books – although not recently which is rather surprising given my WW2 project – is Battle! Practical Wargaming by Charles Grant. If I am honest I would say that I preferred this to his book the Wargame, probably as when I first read it, I was heavily into WW2 courtesy of Airfix and numerous copies of Commando comic books!
The subject matter is WW2 land warfare using 20mm Airfix infantry and Roco Minitanks (for the most part). The rules were simple and Grant unashamedly used vehicles for what they represented rather than what they actually were. I recall copying his idea for a conversion of a Russian infantryman kneeling firing into a bazooka gunner using some wire and fashioning a radio operator from the smg carrying squatting figure by the hugely technical use of a small square of balsa wood and a another piece of wire. I also remember making the measuring stick for antitank fire with the angle of strike device as well as the various other templates the rules used. It did not stop there either as I also used to make tanks from cigarette and match boxes as well as buildings and ploughed fields from corrugated card. It was all great fun and driven by my modest financial circumstances.
I fought many games with these rules when I was a teenager on the Isle of Sheppey using unpainted plastic figures although the vehicles, at least when they were kits that is,  were painted. For some reason we never bothered with the Airfix polythene vehicles.
In the book Grant covered most of the usual WW2 tabletop features we are familiar with although there was no mention of aircraft. I enjoyed reading his rationale behind his rules and his comments on visibility and the effects of chance in wargames have stayed with me. I flirted with the idea of ‘hexing’ the rules but did not really pursue it to any great extent. I also enjoyed the actions he fought using his rules.
I would happily use these rules again and I seem to recall that someone had updated them to include more complete vehicle lists and certain missing weapon types. I believe that a modern version also exists.
When I first considered using 20mm infantry figures from the Axis and Allies board game my initial thought was to use Charles Grant’s rules as they are simple and great fun to use. I suspect he would not have been overly concerned about aesthetics in respect of what equipment was being used by whom as the game was the thing.
A great set of rules.
﻿
﻿
Posted by David Crook at 09:12

This expanded version is new to me.

The additional chapters were written for the series when it was published in a magazine format. These chapters never made in into either the magazine or the 1970 book. Charles Grant's grandson made them available to Caliver Books and he also wrote an introduction as well as preparing a playsheet for the rules.

I will try and get an original copy of the book at some point.

I use Battle rules for my imagi-nation games also I have rules called Hans und Panzer which concentrates on German-Russian warfare with more weapon stats.

I would be interested to read more about your imagi-nations and also the rules you mentioned as I have not heard of them.

David
The rules in Magazine format can be seen in the Meccano Magazine Viewer see the blogpost at http://wargaming.info/2011/charles-grant-battle-practical-wargaming/#.W05MR5F4WhA

What does the new material consist of?

I discovered this book (original edition) in the library as a child, I trace the beginning of my malady to that date. Quite a rush to see the cover after all these years. Thanks, and keep on gaming.

My local library was a source of great inspiration and this was part of it!

These WERE available as downloads here: https://wargaming.info/2011/charles-grant-battle-practical-wargaming/#.Xr_n68BlDct but the links are dead now. I found a copy on Scribd here https://www.scribd.com/doc/47379846/Battle-by-Charles-Grant