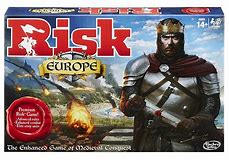 The box art - this is not like a 'normal' Risk game, in fact I think it is closer of Axis and Allies in many ways. 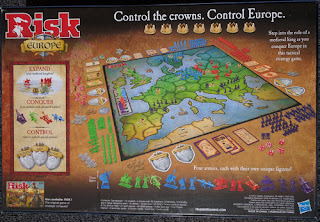 The rear of the box showing the components. 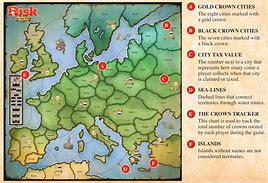 The map board - very useful as the basis of some stylised campaigns.

The figures - and they are very nice indeed! 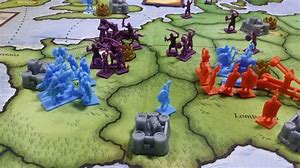 Finally, a game in progress with what looks like Scandinavians and Arab/Turkic types fighting over France....

There are many periods of military history that I have an interest in – there are also many periods of military history that I am unlikely to raise armies for. The Medieval era for me very much falls into the latter category. Of course systems like Saga, Lion Rampant, DBA/HOTT and the Portable Wargame mean that smaller armies are required with the obvious advantage of needing less figures and are therefore much quicker to get into action. That is the theory anyway….
If I am honest I have a strange relationship with the Medieval period. I cannot say I am well read on the subject as the only things I have studied at any great length have been the Mongol Conquests or the Crusades and even then only intermittently. I have fought a few games in the period but not for some time. I have come to the conclusion that my ‘interest’ in the period is largely what I would call a Hollywood one in that my ideas of warfare in the period have been firmly influenced by the films I have seen. With this somewhat lackadaisical approach to historical accuracy it is fairly safe to assume that any armies I undertake will probably be of the ‘based on’ variety rather than being super accurate.
That is why I was so pleased to have  acquired a couple of copies of Risk: Europe way back in November of last year.
As mentioned in a previous post this version of Risk is unlike any other and in fact is more like an Axis and Allies style of game. The troop types have various strengths and weaknesses – for example you are not able to attack a castle unless you have a siege weapon – and although the armies are made up of the same types of figures (missile troops, hand to hand fighters, cavalry and the aforementioned siege weapon) the game uses different models for each army. The figures are pretty generic and represent eastern and western European forces, Scandinavia and Arabic/Turkic. They are small 20mm scale moulded in a kind of soft plastic.
A single copy of the game will net you four armies each of 12 foot, a dozen missile troops and 35 hand to hand fighters with around 4 siege engines – of differing types. Having two sets of the game gives a little extra flexibility.
Much as I am intrigued by the game in its original form the likelihood of getting sufficient people in the same space-time continuum to actually play it is unlikely. However, as a low cost option for some Medieval mayhem you could do a lot worse. The two sets cost me £20 so there is a lot of figures there and all the other material  - the stylised map of Europe for example - would come in useful for campaign purposes.
These are not on the radar for anytime soon so no decisions really need to be as such in respect of painting or basing, even which rules to use with them. In a moment of weakness I may cobble up a couple of DBA/HOTT forces - these would be great to use for a fantasy set up methinks - as a side hustle so to speak.
Something to think about then.
﻿
﻿
﻿
﻿
Posted by David Crook at 16:43

This game has been on my wishlist for some time - as you so rightly point out it has a lot of possibilities. The board reminds me of that other classic board game Diplomacy.

It certainly has a nice feel to it ;)

the figures are very nice in a wooden old school kind of way and the map is very useful. As I have said, I suspect I will not play the game as is but the components are very useful indeed.