My streaming head cold has abated somewhat but a growling chest, rasping throat and a cold sore large enough for its own post code remain (the after effect of the streaming nose). No other family members have been suffering and so I am confident that this current malaise was acquired courtesy of the three hour flight home from Corfu but I digress....

As is my wont I have spent a lot of time recently thinking about gaming 'stuff' and in particular the whole 'imagi-nation' thing and how and why one would use such a vehicle for one's gaming. There is no simple answer to this and I suspect that many gamers have their own ideas as to why and to what extent such a course is followed. I use the word extent deliberately as there are imagi-nations and imagi-nations in my experience and it is interesting (to me anyway) to see how far along the path gamers go when choosing this route.

There are many gamers that indulge in imagi-nations to a greater or lesser degree and I apologise in advance if I have not mentioned any particular favourites - this is not intended to be a definitive guide to the subject; rather it is just a casual overview.

At the top of the list is full blown made up country set in a particular time frame with assorted armies based on that particular era. This gives a player free rein to use whatever forces he or she likes and to create units, uniforms, personalities and all the other wherewithal to set one's games in. the obvious choices in this regard would have to be (and this is by no means anything like an exhaustive list) something like Tony Bath's famous Hyboria ancients campaign or Grant's 18th century set up. Henry Hyde is currently plotting something similar set in the 18th century in something akin to the Indian subcontinent. Bob Cordery has also set up a 'world' for 1891. There are many others. 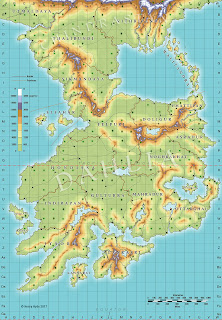 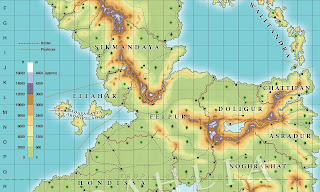 ….and a small detail from the Dahlia and Chindrastan map featuring the dedicated Madasahatta Archipelago with the capital Knowlesabad
﻿
﻿

Running something like this is a real labour of love and goes way beyond painting up some figures and fighting battles on the tabletop. I also believe it is ideally suited to the solo gamer as they can immerse themselves fully without worrying about prejudices from live opponents - those that don't get what you are trying to achieve. In my experience if the background, however colourful it may be, is historically credible then most gamers will happily take part in it if asked. When I say historically credible I of course mean that if something is being offered as an 18th century set up then the table top action should of course be in line with expectations. 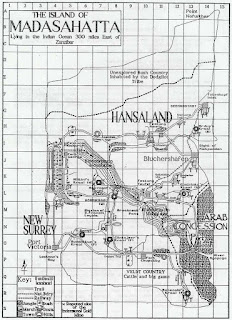 Next up is the imagi-nation populated with historical troops - for which I would say Madasahatta. For the most part the troops were, for want of a better word, conventional WW1 Colonials with the locals being based on various historical tribal types. This option would be easy for the dedicated historical gamer to dabble in something a little out of the ordinary but again, it relies heavily in my opinion on the credibility of the background offered. My planned adventurs

The final category is not really an imagi-nation per se; rather it is taking an historical country and adding troops that were never there. From own experience to me this means the Turkish South East Asian Fleet and supporting ground troops based on Sumatra during the naval campaign devised by Eric Knowles as a follow up to Madasahatta.

For my part I have always been (and this may come as a surprise to many) slightly torn about the whole 'imagi-nation' concept from a practical perspective - although certainly not from a theoretical one. I would prefer to design my own uniforms and populate my own countries but of course, once you go down that path it means you have a collection of painted figures that may or may not be suitable for something historically based. Some gamers can be very picky about such things although most of my crowd would not be overly concerned matching their historically accurate figures with some 'never wozzers'. It would take a leap of faith to cross that particular Rubicon fully in my case but it is something I am coming around to more and more.

For a variety of reasons I have been looking long and hard at some 'imagineering' for a particular idea I have in mind. Previously I had made much use of the ideas of other people - nothing wrong in that - but I have come to the conclusion that there is always something that does not hang right in other people's worlds. This is by no means a criticism as many of these are far more detailed and ambitious than I would have attempted. In order to satisfy my own requirements I believe I will have to do my own thing and so this is what I am going to. I will offer no details at present but suffice it to say it will feature the second half of the 19th century with an optional follow on up to the Great War.

Interesting thread! Regards your point about "you have a collection of painted figures that may or may not be suitable for something historically based" we opted to use analogs of major players for our 18thC imagi-nations setup with close to accurate national uniforms but our own banners, etc. The best of both worlds...

Now that you mention it, it is rather good!

Good point well made - and a cunning idea to boot!

Good luck with your imagineering project. It's good to hear about this sort of thing, I find - the stuff other people think of and do is always great for turning up unexpected inspiration! Also, I seemed to always find the 18th Century was the 'default' which folk always did: something innovative could be really interesting.

All the best,
Craig

I also found that the 18th century was a default for this kind of thing - Charge! and The Wargame were hugely influential in this - but there is no reason why other periods could not be tackled the same way and indeed, have.

I have not entered uncharted waters as such as the armies will be largely historically based but the theatre of war should be interesting.