The Across Four Oceans logo
﻿

Way back in 2012 I posted about a set of WW2 Naval rules inspired by Axis and Allies: War At Sea available from Boardgamegeek. The set was called Across Four Oceans and there is a link to them in the post mentioned. 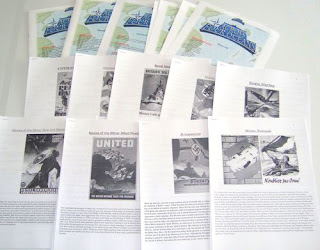 The rules and fleet lists. There is a tactical and an operational set of rules designed for campaigns.
﻿

Whilst is the very warm man cave (sweating profusely I might add!) I came across my folder with the rules contained therein and so thought I would take a further look.

I am very pleased I did.

A number of years ago Mr Fox and myself spent a lot of time (and money!) amassing fleets using the 1/1800th scale models available as part of the Axis and Allies: War at Sea collectible miniatures game. We had some superb games at the club using the huge cloth that I had marked out with 8" offset squares. The rules were simple and involved great handfuls of dice. As a game it was enormous fun but it always felt a little like a Chinese takeaway - satisfying in the short term but leaving you hungry for more shortly after. Our enthusiasm waned and the fleets were disbursed to the four corners of the globe. The models were nice but the scale was a little on the large side for anything other than large playing areas - meaning the dining table was out. You could use the rules with smaller models but this was not an option we ever really thought about - which in itself is surprising as there are plenty of 1/3000th scale fleets at the club.

Across Four Oceans have essentially taken the Axis and Allies system and 'wargamered' it. The rules are far more detailed and are designed for use on a hex grid although there is a hexless variant. Aside from the tactical rules there is also a very nice set f operational rules that can be used for campaigns.

I have the rules and three fleets lists printed off - the Royal Navy, Kriegsmarine and the Italians - but there are a whole host of others as well. These also include aircraft.

I shall spend some time rereading these as, on the face of it, they offer a complete system for WW2 naval gaming including air operations. They also have the additional scale of detail that the Axis and Allies rules lack.

For my part using these rules would make my WW2 project easier to initiate as a lot of the work has already been done. I also think that using the models I have from the Axis and Allies strategic board game on a 4" hexagonal grid (or even gridless) this could work very nicely from a space perspective as the size of the models would not look out of place on a tabletop.

As ever, lots to think about.

It's usually a bad sign when you find rules you once played avidly but have forgotten you owned....been there, done that! Looks like an interesting set.

Across Four Oceans is a detailed development of the Axis and Allies set that I played an awful lot of. A4O I have not used as I never got around to doing so. That sad state of affairs will be rectified shortly though!