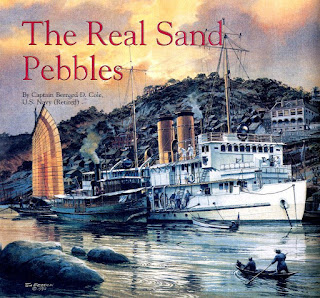 One to look out for methinks
﻿

It is funny how a throw away comment can spark a whole sequence of events. In this case we are not talking about something new - rather it is more a case of taking one's thoughts into different areas. You may recall from last post I was talking about ACW river operations and my plans around these since I had recently (re)acquired my Peter Pig Hammerin' Iron hexed cloth.

So lets see - ACW ships - check, ACW naval rules - check and ACW naval cloth - hang on, the cloth is not only ACW surely?

At this point along came that well known bon vivant, wit and raconteur - Geordie who commented on my last post and casually mentioned the Dardanelles.

Dardanelles? Now my interest in matters Ottoman Turkish is well known and after a quick look at the possibilities of using the cloth for this I was struck by a thought - which in turn led to several others.

I was thinking about gunboats and where they have fought. There are quite a few large rivers that have seen actions using gunboats - the Tigris, Yangtze, Nile and Danube spring to mind with the 'Great father of waters' the Mississippi naturally featuring for the ACW. It would be churlish to limit myself solely to the ACW when there are so many other opportunities to explore and with the added attraction of not needing very much in the way of material.

David Manley has produced a set of rules for fighting on the rivers of Europe during the Great War called River Wars which would be a good source of information for ship types etc as well as being a pretty good set of rules as well although sadly are not hexed. There is also a supplement that covers the Russian Civil War and the base set called Steamer Wars that tackles the Lake Tanganyika expedition.

I was browsing the net for further inspiration when I came across the following website that provided me with yet further inspiration although I doubt I would game gunboat action in 1/1200th as the ships would be a little on the small side but 1/600th would be perfect.

From the Peter Pig range there are a few ships that could be readily converted into other types and there is also the possibility of scratch building - a route that Bob Cordery has followed very successfully.

So what does all this mean for me in real terms? Well, the provision of naval support via gunboats and actions involving the same is something I will be tackling for the ACW for sure but I am very tempted to expand this into the Balkan project in some way if I can. Should this not work out I could easily look to tackle something on a standalone basis - the Tigris during WW1 would be an obvious choice (I have a couple of very good books on the subject) but for sheer variety of nationalities the Yangtze during the interwar period has much to commend it.

I suddenly have this compelling urge to watch Khartoum and the Sand Pebbles again....
Posted by David Crook at 10:06

Funny you should mention that...;-)

There is also a lot of material in the Peter Pig 1/600th ACW range that could be pressed into service - I am thinking around the 1875 to 1885 era at present - and the whole Chinese thing would be a self contained standalone kind of affair should I go down that route.