Ali Pasha of Janina (not the Tortoise) 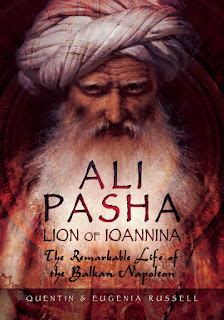 A little earlier than the period I shall be gaming but it would be churlish not to factor him in somehow some 50 years later!
I first saw this book a while ago and have to say that my curiosity was piqued! With my thoughts plated firmly in the Western Balkans and the Ionian Islands it seemed like a good idea to invest in a copy - purely for research purposes you understand....
I have yet to read it and so will quote the back cover instead so you can see why I am so pleased to have this.
"The Authors chart the rise of Ali Pasha from Albanian Brigand to a player in world affairs.
Ali Pasha carved his own semi-autonomous empire within the Ottoman Empire and much of Greece.
An astute politician and skilled general, Byron called Ali Pasha the Mahometan (Muslim) Bonaparte.
During the Napoleonic wars Ali's favour was courted by all sides; he allied himself first with the French and then the British.
Ali's actions and eventual demise hastened the decline of Ottoman rule and the commencement of the Greek War of Independence.
The epitome of an oriental despot in Europe, Ali became a living legend and Western visitors such as Lord Byron queued up to visit his court in Yanina (Ioannina)."
I am hoping this book will help to flesh out the background to my planned Western Balkan undertaking and when followed by the Greek War of Independence should give me plenty of information to ponder for my project.
Ali Pasha the Tortoise is another story altogether but worth a look all the same. 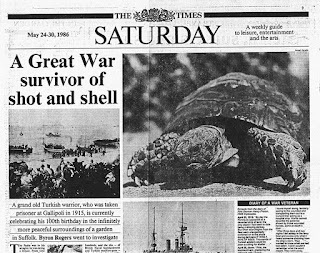 Love that story about the Tortoise. I like that sort of oddity!

I came across the story quite by accident but like you also appreciated the oddity value!