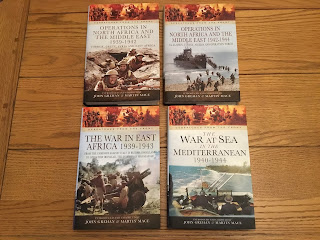 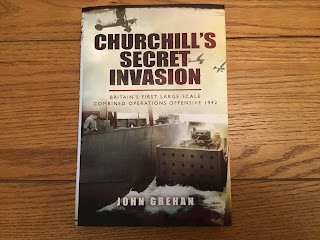 The dedicated title written by one of the editors of the set above.
Way back in April at Salute I picked up the final volume of a 'series' of books covering WW2 in the Mediterranean. These books, from the Pen and Sword 'Despatches from the Front' series, are compilations of official reports interspersed with a brief narrative to place the reports into context. As these are official reports the language can be a little stilted at times but they are a goldmine of information for anyone interested in the 'reason why'. I have really enjoyed dipping into these and they have proven to be very useful as well as being full of gaming ideas.
The East Africa volume is probably my favourite simply because of the sideshow nature of the campaign and my soft spot for such things. As mentioned this book also touched on the Madagascar operation and so when I saw that one of the editors of the series had written a dedicated book on the operation I immediately acquired a copy - and very good it is as well!
I can do no better than quote the Amazon description of John Grehan's excellent title thus:
"In the spring of 1942 Britain's far-flung empire was in the greatest peril. North Africa was being overrun by the German Afrika Korps and in south-east Asia the forces of Imperial Japan had captured Singapore and were threatening India. Only the most urgent reinforcement of both war fronts could prevent disaster. But Britain's shipping routes to Egypt and India passed the island of Madagascar. If the Japanese Navy, operating out of Madagascar, could severe Britain's communications with Cairo and Delhi, then the whole of North Africa and the Indian sub-continent would be at the mercy of the Axis Powers. In a desperate race against time, and under conditions of the utmost secrecy, at Churchill's instigation Britain planned to seize Madagascar, the fourth largest island in the world, before the Japanese could strike. An overwhelming force was assembled and despatched as part of the largest convoy ever to have left Britain's shores. Yet the expedition's commanders were faced with not just military but also political obstacles, because the forces occupying the island were not those her enemy's but those of her former ally - France. The Secret Invasion is the first book to examine in detail this crucial campaign which was Britain's largest amphibious assault since the First World War and the first large-scale combined air, sea and land operation Britain had attempted"
So, British and Commonwealth troops fighting the Vichy French to ensure that the Japanese could not take control of the island and threaten the Cape.
There is a lot of potential here and it is certainly an interesting, if little known, campaign.
﻿