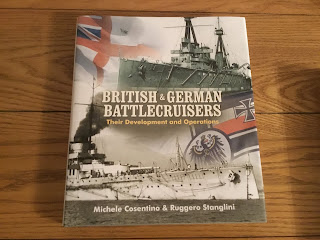 HMS Invincible on the top and SMS Goeben at the bottom

It is not something I have spent a lot of time on recently but I have had a soft spot for the Great War at Sea since the late 1970s. My fondness for General Quarters 2 and the Avalon Hill game Jutland are well known and games set in the North Sea have given me much pleasure over the years. Then of course there was my plan to tackle Jutland in time for the centenary in 2016 using 1:2400th scale models. It was a great idea at the time but sadly did not come to pass. 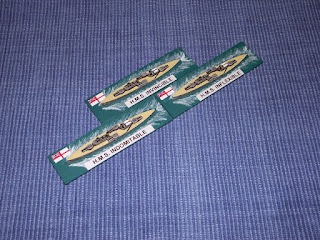 Attached to the Grand Fleet at Jutland - models by Panzerschiffe 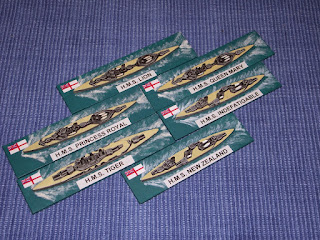 The battlecruisers under Beatty at Jutland. Indefatigable by Panzerschiffe whilst the others are from Stonewall Miniatures. 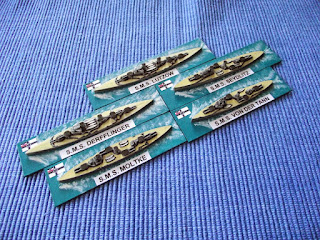 The German 1st Scouting Group at Jutland. Lutzow and Derfflinger by Stonewall Miniatures and the rest are by Panzerschiffe

I was always fond of the battlecruisers for the period, particularly German ones, and I think it is fair to say that they would, under normal circumstances, be the first heavy units into action between opposing fleets. There is also the attraction of the ships involved being rather different in terms of design with the British ships being typically more lightly protected but with heavier artillery whilst the Germans were better protected but with lighter guns. In all the games I have fought between the two sides invariably the action gets fairly intense and fairly quickly at that.

I was not thinking about Jutland or the Great War at Sea when I popped into town this afternoon on a couple of errands. We have a small indoor market that boasts a remaindered magazine and book stall and I always make a point of paying it a visit when I go into town (which is not that often if truth be told). It was there that I came across the above book at a ridiculously low price and all thoughts of financial discretion and project focus went straight out of the window and I promptly purchased it!

British and German Battlecruisers - Their Development and Operations by Michele Cosentino & Ruggero Stanglini is published by Seaforth and is ISBN 978 1 84832 184 7.

The book has 272 pages features the following contents:

There are pictures, maps and technical details galore, all of which are grist to the naval wargaming mill. I can honestly say that this is one of the best books I have seen on the subject and I am absolutely delighted to have grabbed a copy - especially for less than half the price quoted by Amazon.

That very nice man at Tumbling Dice is planning to complete the fleets in his Age of Battleships range up to 1914 which means that in conjunction with Stonewall Miniatures there will be two UK based manufacturers of 1:2400th scale warships - which can only be a good thing in my opinion.

Destiny is prodding my conscience so I am thinking that sticking to the battlecruisers for WW1 would be a compact and historically viable set up and it would not be too difficult to raise.

I have handled (supposedly a piece of Invincible on the Dutch island of Terschilling, which has a museum with loads of Jut land relics in it.

I had a similar experience at Duxford a few years back when I touched a one foot square cube of steel allegedly from the belt armour of the Tirpitz.

Is that me or the book?

I will - in due course, meaning when Paul at Tumbling Dice has the models ready.