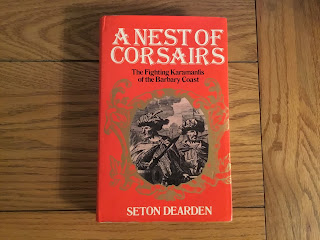 Part of my research into the naval side of the war of 1812 touched on the Americans and their wars against the Barbary Coast. Naturally the prospect of anything touching on the Ottoman Empire or the constituent parts of it was always going to be of interest and so my research led me to acquiring a copy of the above title.

The story of the Karamanlis family, that threw off the Ottoman yoke and were the rulers of what is now Libya for some 120 odd years, is one of intrigue, internal and external conflicts and the latter included Britain, France and the USA. The armed forces of the Karamanlis were paid for by piracy, slavery, bribery, extortion and all manner of dubious practices and the story was enriched by The appearance of some colourful characters that could have been straight out of a pantomime.

I have only just started reading this but already the creative juices are flowing. I reckon there is plenty of scope for all manner of punitive expeditions, combined operations, raids and similar. The naval side would feature the usual low level stuff - frigates, brigs, sloops etc whilst such things as Xebecs make an appearance - both sail and oared varieties.

I have already decided that the naval side will again in 1:2400th and this ‘sideshow of a sideshow’ represents a minor addition to the 1812 collection. Tumbling Dice produce all the models I would need so as is usual, all I need is a slot in the project list.

Frankly what's not to like about a conflict such as this. Looking forward to seeing what you do with this.

From what I have so far the situation within Tripoli (as it was known at the time) could best be described as organised chaos! There is a lot of potential with this for sure - including internal rebellions and wars against Turkey, French, British and the US of A.

One to explore further methinks!

I recall sometime in my teens reading a book about the US naval campaign on the Barbary Coast, and an interesting read it was. I sometimes wonder whether the US unilateral involvement there - justified as it was (in my view) - set a precedent for subsequent interventions elsewhere around the world, motivated by much less altruism, and with far less happy consequences.

That is a good point and you may well be right!