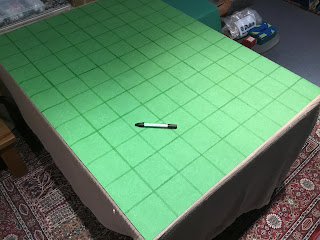 It has been a busy weekend with the domestic round but I was able to solve a rather pressing problem. I have mentioned about about my grid dilemmas, rather I have mentioned about the size of the grid areas themselves and also whether or not to go squared or hexed. I looked at some commercially available mats and the cost was sufficient to give one careful food for thought.  I am happy to say that I have solved the problem in a rather novel way.

A couple of years ago, as the result of one of his occasional reorganisations, I was gifted a couple of vinyl Games Workshop gaming mats by Bob Cordery. There was a green mat and a sand, desert version. These were sized at a shade over 6ft x 4ft. I could have used these as they are but I decided that as my ideal playing area is 4ft x 3ft that it would be an idea to cut them in half and grid one of them.

If there are any Games Workshop disciples reading this then apologies for this apparent act of desecration.... 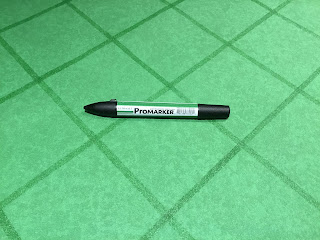 Some time ago (about three years as I recall, maybe longer) I purchased as couple of high quality permanent marker pens made by Letraset from a local art shop. These are double ended - a broad chisel end and a fine point - and come from quite a large range of colours. I have used them for a couple of things but today was their biggest test yet. The forest green pen I used to grid the 4ft x 3ft mat with 4” squares giving me a 12 x 9 playing area.

I am really pleased I did this - I may even hex the the other half - and using a 4” square with the 30mm figures is perfect. I can deploy a 4 figure infantry unit in line within a square and the whole look is far less crowded than using the 3” version (I shall use that with 15mm figures).

I can now start planning terrain pieces to go with this set up but for now I will need to improvise. I have a couple of novel ideas for this which will feature in a later post.

Very smart looking mat. Letraset is a name I haven't heard for a long time!

Many thanks old chap! The mat has a slightly grainy texture to it which softened the lines slightly. I messed about with some terrain and figures on the mat and they looked just right.

I was quite surprised to see Letraset making pens but hey ho - they are rather good to use albeit rather expensive.

Many thanks old chap! If you look closely there are a few little wobbles but it is close enough to pass muster. Once there is some terrain and figures on it it looks just fine.

That works a treat and a very nice Old School look to it.

I truth I had thought about doing this some time ago but had forgotten about it he mats. It was only when I was tidying up that I rediscovered the mats and thought ‘Now there is a good idea!’.

The mat does have a nice texture to it which served to soften the lines. The end result works rather nicely and so I am looking forward to using it in action.

I like the new terrain mat, and I'm glad that my vinyl cloth has proved so useful.

Terrain like hills etc., should be quite easy to make. I made my square hills using wooden boxes that I found online. A coat of paint and some flock or green felt on the top ... and you have a hill?

The mat worked out really nicely and I am now seriously considering putting a hex grid on the other half of the mat - and then repeating the process for the desert version.

It was important for me to get this done so that I can now plan the terrain I need. That is a neat idea for the hills that I shall bear in mind.

I have some ideas along the lines of the 2D/3D approach I have seen in used and which I know you dabbled with.

Much to think about.