WW1 in the Middle East 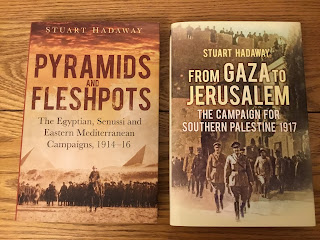 Sand, camels, palm trees, Arabs, Aussies, lots of cavalry (including yeomanry), armoured cars, biplanes and THAT film, not to mention the Lighthorsemen....What’s not to like?

The Great War in the Middle East and the Mediterranean has long been of interest, specifically the two Arab revolts - that of the Senussi early in the war and that of the Bedouin Arabs in the latter part. For the wargamer both theatres have much to commend them. The forces involved tend to be small in size and there is colour aplenty in the shape of the tribal armies. These are important considerations for the time and cash poor wargamer with a taste for the exotic!  Although the two revolts have taken up much research time for me over the years the one area that I did not really get into in quite the same way was of course the main focus of the war in the area -  the Turkish attempts on the Suez Canal and the subsequent Allied push to Jerusalem. I freely admit to ‘dabbling on the periphery’ of this in so much as where the main event impacted on the sideshows and indeed, a number of years ago I purchased a collection in 20mm geared very much towards the same. I was always diverted away though by the exploits of Peter O’Toole, I mean Lawrence of Arabia, so the ‘big show’ never really captured the imagination to quite the same extent. Inevitably the collection was broken up and sold on.

I came across the above titles during one of my occasional rambles over the internet and with the pressing need to satisfy the knowledge gap for Portable Wargame reasons providing the flimsiest of justification, I promptly snapped them up.

Over the two volumes the books cover the war from 1914 to 1917 (one wonders if there will be a third volume) and feature a lot of very useful material. There are maps and orders of battle and a nice selection of photographs. For me the big attraction of these tow books is that they tackle the war in the region as a whole rather than as separate entities. One of the points that cropped up was the fact hat the Senussi revolt featured tribesmen supported by Turks against the Imperial forces whilst in Arabia it was tribesmen supported by Imperial forces against the Turks. I shall enjoy reading these two titles and indeed in some ways it will help with my projected Indian Ocean campaign.

Now here is the thing. I own two unpainted Irregular Miniatures Portable Wargame sized forces - one Turkish and one Arab - that would certainly suffice for the Arab Revolt. I would want to add some specialist units to the Arabs - French artillery, British machine guns and armoured cars and possibly some air support for both sides - but the set up is pretty much OK as is in the short term. I am now of the opinion that sticking solely with the Revolt may be a little shortsighted in the long term. In a nutshell the Revolt was one of raids and sabotage which makes for some great wargame scenarios but I am not convinced that such actions would maintain sufficient interest over time. With this in mind I will need to raise a 15mm Imperial force to include yeomanry cavalry, Australians and armoured cars. This would enable me to fight in a number of ways as each force would be able to fight any of the other forces (as they did historically if one is not to picky about the Arabs being used) and in the case of the Arabs even amongst themselves. It would give me a lot more flexibility for sure.

I looked Pendraken but for two reasons had to pass. To begin with they are 10mm and the figures I have are 15mm and also they do not produce any Arab tribesmen on foot that I could see. There are also no Arab camels and that really gave me the hump....

Hello Dave,
I am thinking of using camels from the Mahdist range. I have them already in my Egyptian 1882 army.


Well an interesting theatre of WWI and no mistake. I've always been torn between this and the East African theatre, but frankly have too many other projects requiring my attention.

Now I'm a bit biased here as I'm a Pendraken fan and game almost exclusively with their figures. Should you ever consider 10mm again, I think the following might be of interest:

The Afghan tribesmen would make passable Arabs at this scale:
https://pendraken.co.uk/colonial/1890s-north-west-frontier/

Code SC8 has a camel rider that again would make a passable Arab:
https://pendraken.co.uk/colonial/1882-1885-sudan-egypt/

I have a ton of stuff for this theatre, which started life as WW1 East Afrika and later expanded to the Mesopotamian and Palestinian campaigns, but also does nicely for the Senussi revolt.

All Irregular 6mm though, bodged up from their WW1 and colonial ranges.

That is a good idea and is certainly something to think about.

Hmmm, I am thinking this may well be a way forward because in this scale a lot of the terrain I own would fit in rather nicely. I reckon the paint job would be straightforward as well.

I had not gotten as far as 6mm although I remember being impressed with their range of suitable terrain.

East Africa is another weakness of mine.