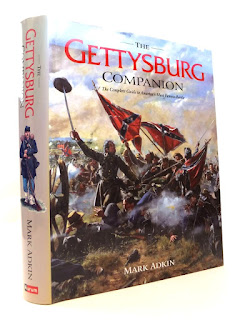 Oh yes indeedy! I have been after a copy of this for years and have finally scored one that does not involve selling body parts to pay for it!

It has been a day of decisions in respect of my ACW project. To begin with I have decided to forego adding a unit of Confederate Zouaves to the collection and instead will raise a units of smartly attired Texans. I say smartly attired as the formation I am thinking of – Hood’s Texans – apparently received a new issue of uniforms just before Gettysburg. That was all the excuse I needed to field some smart looking Rebels in sky blue trousers and brown slouch hats with the officers sporting sky blue kepis as well. Let is not forget the lone star flag as well. The formation also fought against the New York Zouaves (which I have) so it works on that level as well.

I have finally managed to track down a copy of Mark Adkins tome The Gettysburg Companion, written in a similar vein to his Trafalgar, Waterloo and Western Front volumes. It was not cheap but I have been after this for an age so it will fill a hole in the collection rather nicely. There is a painful tale about this book or rather how I missed out on getting a brand new copy for £7 but the memory of  what might have been is still a raw one….

I have settled on the scale for the naval side and it will be 1:2400th. My reasoning is very simple. The models are cheap and easy to paint and it means that I can not only make use of the sea map from Honour and Glory but also the vast array of Heroscape  tiles I have – this is an important consideration given that most of the actions I will be fighting will feature river banks in some way, possibly islands as well. I have ordered a nice selection of types from the rather modest range that Tumbling Dice produce but there is sufficient variety for my needs.

The first order of business with the ACW collection will be to get the additional figures organised and front and centre of this will basing the Union Zouaves I have. The final organisation for each army is very much based on the unit set up from Charge! There will be three infantry companies (16 figures in each excluding officers etc) a light company (sharpshooters - 12 figures) and a grenadier company (16 figures) - Zouaves for the Union and Texans for the Confederates. There will be a squadron and a half of cavalry (12 figures) and an artillery battery of 3 guns and crews (a battery and a half under Charge!).

I also need to think about making a map for the campaign setting - this is something I am really looking forward to!
Posted by David Crook at 20:55

I love it when you finally get a book you've been after for some time at a reasonable price. It still amazes me the varied prices on Ebay and Amazon, as if the sellers don't check out the 'going rate'.

As for the ships, I think the smaller scales are the right decision, as they give the impression of a bigger battle, are quicker to paint and take up little room, which is always a bonus.

I look forward to seeing your campaign map as I'm currently reading Featherstone's 'War Game Campaigns' and love the simple way he has approached this. Less is often more.

Everywhere I looked the cost of this tome was frankly ridiculous and I consider myself fortunate to have obtained it for the price I paid. Essentially it is the original price plus postage.

I am satisfied with my decision about the scale of ships I shall be using and the speed of getting them into action is another factor. They will present few challenges in the painting department, even for me!

I have some ideas about the map and coincidentally I am also looking at Featherstone’s War Game Campaigns.

I shall look forward to see the Texans and the map too.

For the map I have a number of ideas but it really getting the time to do the work that is the problem at the moment.

The Texans will make for some great opposition for the Union Zouaves and whilst they will be rather too tidy looking will be in keeping with the overall look of the collection.

I looked at the author's Amazon UK page and though many of his works are reasonably priced certain of them (Waterloo, Trafalgar, Gettysburg) are extraordinarily expensive. What's more, some have more than one product page with large price differences between them: I think that this is because the publishers differ (possibly UK and USA editions?)

What I don't understand is the publishing industry. Seeing the second hand prices why not take advantage of the demand by putting out POD versions where a book is out of print? For such relatively recent books they should have the digital file available so it wouldn't even be a huge amount of work.

I had not seen this book priced at less than a hundred pounds for ages and whilst I wanted it it was not enough to justify that kind of expenditure. I am paying the original retail rice plus shipping from Germany which is expensive but a lot more palatable.

I do not have his Western Front volume although I may take a look at some point.