More on a Napoleonic Adventure 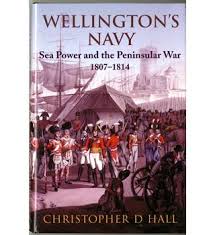 Not something one would first turn to when thinking about the Peninsula War....

As sure as night follows day then you can take it as read that I will always looks at the naval dimension of any given campaign I am studying! I even managed to do this for the Arab Revolt and indeed, the potential of the Red Sea as a theatre of naval operations has featured in one of my long term projects. As I am currently in something of a Napoleonic groove whilst waiting on my hexagon template to arrive I came across the title you see above. To begin with I can do no better than quote the words of the Duke himself:

“If anyone wishes to know the history of this war, I will tell them that it is our maritime superiority (that) gives me the power of maintaining my army while the enemy are unable to do so.”

The Royal Navy played a massive part in the success of Wellington in the Spanish peninsula. Not only did the Navy transport troops and supplies to and from Spain but they also protected the all important supply ships (fully 10% of Great Britain’s merchant marine was used to support Wellington in the Peninsula) from interference, supplied gun crews for use in siege operations and carried out raids all around the coast thereby tying down numerous French troops. This was not the war of great lines of battleships (especially after Trafalgar) but that of the smaller ships, the frigates, brigs, sloops and others.

Strange to relate but although I have looked at the role of the Navy in the Mediterranean I never really studied the Spanish dimension. The above book should help to address that oversight.