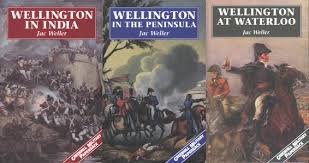 Jac Weller's three titles featuring the Duke of Wellington. The above are the paperback editions whilst I own all three in the Greenhill hardback version. I also have both the India and Peninsula title on Kindle courtesy of an Amazon 99p sale day!

I have often ramble on about my formative years in wargames using an Airfix 20mm plastic 1815 period allied army 'back in the day'. I have always had a soft spot for the Napoleonic wars in one way or another and indeed, have acquired and discarded a number of collections and projects over the years. With my current interest in the war of 1812 holding my attention it was inevitable that I would revisit the broader period, particularly given the British involvement against the French in Spain.

It does not need me to add that the Peninsula War is a rich seam for the wargamer to tap into - from the military perspective it offers everything from small scale skirmishes up to major battles and all levels in between. I would enjoy gaming the period again using figures but to be frank it is unlikely I will do so, especially given the availability of Command and Colours: Napoleonic as a viable alternative.

Having said that, raising a pair of armies for the period is actually not too daunting assuming one has a specific army size in mind. For me what is fast becoming my 'army template' in terms of figures would mean that around 60 to 70 foot and around 20 mounted figures with a couple of guns would be more than sufficient for a variety of options. One could replicate the scenario specific forces for Command and Colours or use the same with the Portable or One Hour Wargame rules - even something from Mersey 'Rampant' stable would fit.

The three books pictured above have been at the heart of my Napoleonic library for years and whilst there may be more up to date histories available still stand up well. They are all easy to read and provide much useful information for the wargamer including maps and orders of battle.

The Peninsula is always a tempting theatre for we British gamers me thinks for the reasons you've already outlined. I think with the right basing, you can game with Dan Mersey's rules all the way up to say Black Powder 'big' battles, without changing anything, which is a bonus. This campaign is something for the future, but for the moment I'll being going down the 1812 route, as it tickles my fancy and I can shoe horn in some of my existing 10mm collection.

As for the figure count, I've found this past year or so that most of my games consist of around 12 units, which roughly consist of say nine infantry, a couple of cavalry and one or two artillery pieces. this doesn't seem a lot but is just the right amount for a nice mid-week game that last a few hours and gives a good game. Long gone are those large all day multi-player games, as my friends and I simply don't have the time nor the energy for them.

You are absolutely right in saying that the large scale 'Cecil B Demille with a cast of thousands' spectaculars as being long gone. To be honest I would take part in them if asked but as for raising the forces required that is a completely different story. I reckon I have hit my sweet spot in terms of army size which could probably be best described as 'DBA and a half' sized forces.

These days a game lasting a couple of hours and fought to a meaningful conclusion is my forte.

It is always a good idea to have figures that can be readily used for multiple types of game and so basing models individually is a good idea. That was the thinking behind the ACW collection in any event and as a concept it works very nicely.

Weller’s books also play an important role in my Napoleonic library, though I think I must have got earlier editions as the publishers of my hardbacks were certainly not Greenhill. I also have two of them on Kindle, probably picked up in the same sales as your versions as they were only 99p each.

I also have, and have considerable affection for, Sir Arthur Bryant’s trilogy covering the whole of the French Revolutionary and Napoleonic wars (“the Age of Endurance”, etc.): Anglo-centric popular history, but popular history at its best, and the first thing I ever read that went into the detail of Wellington’s peninsular campaigns. My attitude is probably a bit biased by nostalgia as they belonged to my parents and I was only ten or eleven years old when I first read them. I also have Kindle editions of the three which make for good holiday reading, but they are no longer on sale. I think that vanished in the debacle that engulfed the Endeavour Press and none of the three successor companies appear to have reissued them yet.

Your posting got me wondering what is the heart of my Napoleonic collection, only to realise that I’d end up listing too many books. However, for the Peninsular War you really cannot beat Oman. Of course, it’s a hundred years old and more information has turned up and much more been written since then, but this remains the definitive work on the war. What’s more there is now a Kindle edition from Wagram press – in seven volumes naturally – which is pretty good quality even though the maps and tables are not as clear as in the printed version. Even if you are not going to read the whole thing it’s a marvellous reference work (and it costs distinctly less than I typically pay for a hardback these days).

As for wargaming the campaign, though the battles are smaller than many of the great Napoleonic clashes they are still a bit big for me nowadays as I don’t want to line up 100s of figures per side. If I’m going for historical recreation, I want rules that reflect the fighting styles and I’ve never really found that I get satisfactory results – for the British – if I don’t represent battalions and my rules have always needed at least four figures per battalion to represent column, line and square. My preference now is more for Portable Wargame style conflicts without any real attempt to claim I’m refighting an historical battle.

I would never presume to follow Amazon logic - perhaps "Wellington at Waterloo" will reach Kindle one day (ideally for 99p!).

I truly hope so!

It was interesting to read your comments and mention of the Bryant trilogy reminded me of another stalwart of my library - a title that defies logic in many ways as it features neither detailed orders of battle or maps other than very basic ones. I refer of course to David Howarth's classic book on Waterloo - A Near Run Thing. Even now this book never ceases to capture the imagination and inspires me in ways that many a better and more detailed tome can.

For me the days of large scale armies are long gone and something Portable Wargame sized is ideal for my needs.