Thoughts on the ACW Afloat

A blast from the past - the original Yaquinto Ironclads and the Expansion set. Back in the day I took part in some epic games of this but they are very detailed and struggle with large actions, especially with ships that use broadsides!

Whilst waiting to take delivery of the bases I need for my 1:2400th ACW Naval collection I have been giving some thought to the rules I will want to use with the models. The first decision I took was that the rules will certainly be grid based. There are a number of options to explore including Bob Cordery’s Gridded Naval Wargames (including the ACW variant that the redoubtable Mr Fox came up with) which have the virtue of being simple to use, are well thought out and capture the all important flavour of the period. At the other end of the spectrum I could make use of the uber-detailed rules from the old Yaquinto board game Ironclads.

Ironclads is a hugely detailed board game of ACW naval combat that came out originally in 1979. There was also an expansion kit produced that covered more ships for the ACW as well as the key ships from the major European fleets of the period. At a ship to ship level or with around half a dozen vessels per side the system worked well enough but anything larger and it became quite cumbersome. The ship data cards for use with the game are really helpful, especially when it comes to the type of artillery mounted. To give you a flavour virtually every major weapon type or calibre carried by either side had a unique stat line for use in the game. Individual hit location was the order of the day and the rules made use of a number of charts and tables that these days would make my eyes bleed! It was a huge amount of fun to play though, despite the complexity. 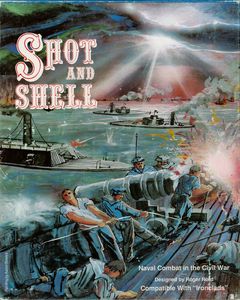 Seen as another expansion to the original although a standalone product in its own right, Shot and Shell tidied the rules up a little for using land assets as well as addressing the problem of broadside firing ships.

There was also a standalone game released called Shot and Shell that was independent of Ironclads but that used the same system and is usually seen as an additional expansion to the original series. Both Ironclads and the expansion set were rereleased by Excalibre Games in the early 1990s but with a significant difference. The Excalibre version featured ship counters showing a side profile of the vessel in question whilst the original version (and also Shot and Shell) depicted ships on a ‘top down’ view basis. 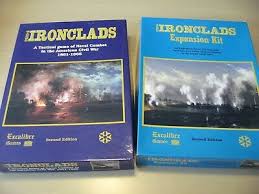 The Excalibre games versions of the original Yaquinto editions. The Excalibre version features ship counters showing a side profile rather than the top down view of which the latter is far more useful in my opinion.

For me the key thing with naval combat in this period is that individual ships should have a degree of ‘personality’. By that I mean that the rules should allow for such things as critical hits or specific damage rather than just marking down damage points. A good example of this (although a different period) is Ship ‘O the Line, the age of sail wargame rules originally published by Battleline.  These rules have that level of detail which makes them an attractive set for small scale actions although not in the same league of complexity as Ironclads.

So where is this heading them? Well, one of the very usable things about the Ironclad system is the ship cards, especially in respect of what artillery is deployed where on any given vessel. This very handy as the rules I am currently looking at are a vintage set originally published in Miniature Wargames way back in 1984 (issue number 14 to be exact) and written by that well known and respected rule writer, Andy Callan. the article including he rules is available from the Wyre Forest Wargames club as follows: Wyre Forest Wargames Club

Despite the name of the rules (any set of rules named after an Enid Blyton character would struggle to be taken seriously in my opinion)  these are a well thought out set that feature many of the key elements that one would expect to see in a game about ACW river based naval combat. As ever with a skilfully written rule set the core mechanics will stand any amount of tweaking which makes them all the more appealing in my book. They are fast moving and indeed, the only thing I need to do is to superimpose them on to a grid. Each vessel will need a damage chart but his is very handy as it means that guns can be marked on in their correct positions.

The first thing I want to do with these is to convert them into being hex based and to then think about what extra chrome I need to add. I will also need to draw up the appropriate ship cards.

I am rather looking forward to this.

I had similar experience with the Yaquinto games, they worked great with the river gunboats but exceeeded their capacity with bigger actions or bigger ships. Have you considered David Manleys Dalgren and Columbia’s?

I must confess that I had not - but I will now!

I have also set up games using the Yaquinto board games. And even though I haven't used them in a while, I keep them for their ship data and scenarios. You might want to look at the board game Iron & Oak from GMT. It uses a square grid and an odd system that compares die rolls, but it has a high production value, plays quickly, chits instead of bookkeeping, and is a little biased toward causing damage. (In too many rule sets, nothing happens with ironclad versus ironclad, except maybe an engine breakdown.)

David Brandon, who wrote _Sail and Steam Navies_, and runs games at the local cons, makes sure that his scenarios include a significant number of wooden ships to make sure mayhem ensues. You can get his rules from Wargame Vault for $20

Funny you should mention using the data cards and scenarios rather than the game - a wargaming friend of mine did exactly that and indeed, that is what I am going to do. I will check out Iron and Oak and also Sail and Steam Navies so many thanks for the heads up.

Playing catch up with a lot of blog reading
Nice to see ACW Naval still in your sights
The Napoleon Books were of interest too
Hobby time at a premium at the moment, plan to be doing a quiet bit of painting over the festive break
Seem to be helping my son out with D&D at themoment

Good to hear from you old chap! I have opted for the 1:2400th scale ACW mainly because it is cheap and also will be much quicker to paint and get into action. I have all the models I need from Tumbling Dice and I note that Panzerschiffe in the USA produce a range in this scale that covers some of the missing types so I may place an order with them in due course but it is not essential.

Napoleonics are always there or thereabouts for me and at present are probably more about than thereabouts!