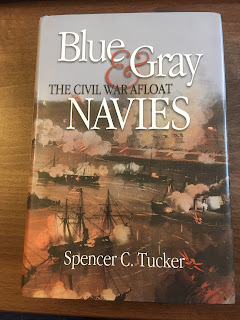 I reckon that for now I have pretty much all the material I need for the naval side of my ACW project. In addition to a couple of titles on the ships and the two volumes by Jack Coombe (Thunder along the Mississippi and Gunfire Around the Gulf) there are also some sections contained in Battles and Leaders and a number of Osprey titles. There is also the Kindle based Gulf and Inland Waters by Mahan - available for free from Project Gutenberg - which is a good read.

Despite all of that I was missing a good overall history of the naval side of the Civil War so when I spotted the above I figured it would be a good way to address this. I can safely say I was not wrong as this book is really rather good.

To give you a flavour here are the contents.

1. The Union and Confederate Navies: Organisation, Personnel and Shipboard Life
2. Resources, Facilities, Warships and Naval Ordnance
3. Union and Confederate Naval Strategies and the Start of the War
4. The Blockade and Early Atlantic Coastal Operations
5. Early Union Riverine Warfare in the West
6. The First Clash of Ironclads
7. Union Operations on the Lower Mississippi: The Capture of New Orleans
8. Union Riverine Warfare Continued: Vicksburg
9. Union Operations against Charleston 1863
10. Unconventional Weapons: The Torpedo and The Submarine
11. The Commerce Raiders
12. The Red River Campaign
13. The End of the War: Coastal Operations
14. Conclusion

There are also notes, a glossary and an extensive bibliography to support the above which is always useful. As a one volume overview of naval warfare in the American Civil War this certainly ticks all the boxes.

There are a couple of other titles it would be handy to include in the naval section of my ACW library  but for now I have more than sufficient to be going on with. I have the models I need and merely need a single packet of MDF bases (currently on order) to crack on with the painting. As far as rules go I have a number of options to explore - some old friends with some newer stuff and the odd homegrown option.

This will be a lot of fun.

I have a copy of Thomas Scharf's 'History of the Confederate States' Navy' (originally published c.1887) - a most interesting read. Although some of the final CSN operations towards the close of the war have a certain 'opera bouffe' about them, it is remarkable what the CSN managed to achieve given the scanty resources available.

If you think the account in Battles and Leaders of the career of CSS Arkansas is exciting, just wait until you find the chapter in Scharf's book!

I have Scharf's book too, and also "Guns on the Western Waters". I am not a fan of the ACW, and have never really got excited about the land campaign, for reasons I won't go into here, but the Riverine campaign, with the improvised ironclads is just so interesting and ever so slightly bonkers. The Peter Pig ships are super little models, too, and "Hammerin' Iron" a lot of fun.

I have heard of this but have yet to see it so reckon that it may now be worth tracking down. The Confederates were able to achieve miracles with their naval effort especially given their parlours resources as you rightly point out. I have a soft spot for the Arkansas and she was one of the first ironclads I scratch built years ago.

I will also look out for Guns on the Western Waters as this is the theatre I am most interested in. The whole riverine thing has always been of interest and for reasons you have mentioned - it is certainly ever so slightly bonkers for sure!

I liked the Peter Pig rules and models but I will be using smaller models - mainly because they suit my solo gaming better.

Hi David -
I was sufficiently interested in the riverine operations, especially in conjunction with the land, that I scratchbuilt a fleet for both sides. The first one I made was an inaccurate version of the 'Cairo' class semi-ironclad, which I still have, giving it the name 'Watusi'. I made better versions later, two of the 12-gun versions 'USS Carondelet' and one other, and the larger 'USS Benton'. The Union also got a monitor, and a couple of other boats.

My CSN comprised armed steamers, with 'CSS Tennessee' as the kind of centre piece. I was going to build 'Arkansas', but couldn't find a reliable plan for that vessel.

All these were built at 1:300 scale, and actually don't look too bad on the same table as my Airfix plastic soldiery. I've also added tugboat/ tenders, and a group of 3 mortar barges for the Union navy.

Unfortunately, these fellows haven't seen any worthwhile action for over 20 years.

Originally I had planned to to scratch build the models in such a way that they could readily be deployed on the table top alongside the 30mm figures. I may still make a couple of representative models but for purely naval games (rather, where the action is mainly afloat) I am going to use 1:2400th as the scale of choice.

Years ago I made around 50 models that were designed to fit in a 4” hex and used them a couple of times (see the games folder - Raiders of the Lost Ark(ansas) ) and there was an Arkansas although it did not really look much like the original!