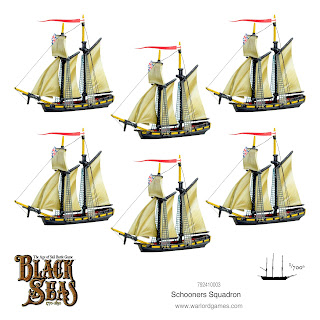 It has been a busy few days with lots of domestic stuff ongoing - much of which has been rather challenging  in one way or another. Despite this the grand sort out of the man cave has begun and whilst there will be some gaming related disposals overall these will be quite limited. It is more about making the contents of the man cave far more accessible and above all, organised.

I have been landed with a rather delicious dilemma though. My recent acquisition of a pristine copy of Warlord Games Black Powder naval variant Black Seas (courtesy of the Jolly Broom Man) has given me much pause for thought. I really enjoy age of sail games and indeed, my plan was to try and build some ships for the period using my MDF system. You may recall that I had a copy of Black Seas from some time ago but to be honest I was not hugely taken by it. The models are lovely but at the time I did not feel confident enough in my modelling skills to do them justice and in any event I was distinctly underwhelmed by the rules.  Even then my thoughts had centred on my favourite set of rules for the period - Ship ‘O the Line (the forerunner of the board game Wooden Ships and Iron Men by Avalon hill) from way back in the 1970s.

I had plans for tying in the low level naval action - primarily frigates and smaller - with some land operations and so acquired a selection of 20mm nautical types together with marines with a view to tackling some combined operations on the Eastern front of the peninsula during the Napoleonic Wars. It was grand scheme overall but for a variety of reasons it kind of fell by the wayside and so the embryonic forces were quietly disposed of.

Now here is the thing. For some unknown reason I now feel far better prepared to take on assembling, painting and even rigging the models from Black Seas. I can only put this down to the confidence gained as a result of my ship building - I realise this probably sounds rather quaint but I really feel in some way empowered by the experience. The number of models involved will be small and therefore far more manageable. Even the land elements would be quite modest in terms of numbers - we are not talking massed Napoleonic armies after all, effectively naval landing parties or raiding forces.

My problem is that I also have a liking for something pirate based as in the typical 17th century version. Again, I would be looking to tie in the land side for this and I also thought about making my own ships for the project.

My dilemma is simply that I am unable to choose between them as I cannot really justify having two conceptually similar age of sail set ups. The Napoleonic Wars would have a certain degree of regularity about it in that I would once again revisit the land dimension and the naval games would be really enjoyable. I would even look forward to making the ship models - they are really lovely in my opinion and worthy of my best efforts (including rigging). The pirate side would be a little more anarchic for sure but again, overall would offer a similar types of experience.

Crucially I now have the ships for the Napoleonic period and gaming wise it is far more of a known quantity. I also have a better starting point than previously in that I can position the land side far more efficiently - meaning I can do it how I like rather than attempting to work around an existing collection. Black Seas comes with three frigates and six brigs and so for my plans merely needs at this stage a further frigate. I note that gunboats are available as well as Schooners, Cutters and Bobs Ketches so at the lower level as far as ships are concerned the project is well served. I could not see me heading to the dizzying heights of first rate ships although a box of 74s may be in order at some point....

But what of the pirates? This really is a tricky one as I would enjoy getting some pirate ships organised as well as fighting some of the raids in the Caribbean. There is plenty of choice as far as figures are concerned and the anarchic nature of it all has a certain whimsical charm for me. Besides, we are talking about pirates here....

Of course, let us not forget that French privateers were very active during the Napoleonic Wars....

I need to think about this some more although it must be said that the Napoleonic Wars does have its nose in front, or should that be bowsprit?

Not that I would want to complicate your life... but... have you seen Barry Hilton’s Mad for War rules...

Or to really mix it up how about the oak and iron game system and ships?

You have an interesting dilemma. Although for pirates, you might consider doing some Barbary types using the recently released xebecs from Minairons (https://minairons.eu/en/1-600-scale-ships/1226-1600-xebec-8436545322864.html). That would fit in well with brig and sloops for the Napoleonic era. I also think the idea of Napoleonic privateers is a good one. That would allow you to do French and Americans privateers and a reason for those ships to try to escape. But you may need to find some merchants too.

For a piratical game you might want to look at "Oak and Iron" from Firelock Games. Its a lovely game system and the easy-to-assemble models are lovely. Its written firmly with the golden age of piracy front and centre.

Now there is a good idea! That has given me an extra dimension to consider....

Now there is a thought and trust me - I am thinking....

My resolve has already taken a battering - and you have just made it a whole lot worse!

They are lovely looking models though and for sure there is a lot of potential!

Surely if you did the classical age of piracy you would only need a handful of ships David? Terrain might be a bit different from the eastern Iberian seaboard mind.

You are quite right about not needing a lot of ships - for either option - so I can see me inevitably doing both! Of course if I look at the Napoleonic Wars in the Caribbean it will only mean one lot scenery...,

Much to think about!