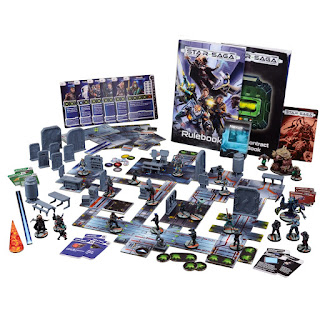 The base game contents.... 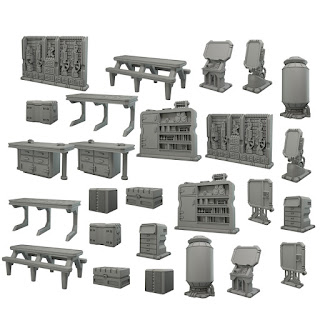 ....and all that really useful interior terrain - there are also some very nice doors of assorted sizes, just right for sealing off from marauding nasties

I mentioned several blog posts ago about picking up a copy of Mantic Games Sci Fi style Dungeon Crawler - Star Saga - for a pretty good price via Amazon (£35 to be exact). The rationale behind this was that I really enjoy Sci Fi skirmishes and as this was also a grid based affair with an awful lot of stuff in the way of figures, terrain pieces and map boards it would be quite versatile - especially for use with things like Galactic Heroes or the forthcoming Frostgrave in space, Stargrave, To be honest other than glance at the rules and checking out figures I have done ver little with it so far as the ship building has taken priority.

I found out via the Stargrave Facebook page that Mantic were having a sale of sorts whereby you could buy the base game of Star Saga with a game screen (rather like the old Dungeon Masters screen, behind which were usually stored bits of paper, assorted dice and pens as well as cans of coke and the odd Mars Bar) and an additional set of the combat dice all for £24.99. For the record I would not ordinarily have purchased the screen, possibly not even the dice but the whole package was simply at too good a price to turn down so I didn’t!

It duly arrived yesterday and so now I have two full sets of the base game meaning some 70 odd figures and a whole shed load of interior 3D terrain all of which will be useful. I noticed that Mantic also produce some additional expansions with some additional figures but to be honest for the present this will suffice. The one additional expansion I did order though concerns creating one’s own characters and designing missions etc which is always very useful.

I now have more than sufficient material for some nearish future style Sci Fi skirmishes which can be expanded as required in due course. Naturally there is a cunning plan in place here but that will be for another day.

I should also mention that the rules for Star Saga, as well as the Jake Thornton designed larger scale skirmish rules called Deadzone (set in the same universe) are available to download for free from the Mantic Games website - and yes I have already!

Back in the day I used to play a lot of Space Hulk which was huge fun - at least until GW took the whole thing rather too seriously for my taste with the models - and this is very much in a similar vein although with far more depth. Dare I day it? It is not just another bug hunt although if you wanted to that would be a viable option. Initially I was only looking at the game for the material therein but now that I have looked at the background in a little more detail it certainly ticks a number of boxes for me. Some the base game figures could easily be used for contemporary special operations style games - think Strikeback for inspiration - so I am not looking at it exclusively from the Sci Fi perspective.

I have a copy of Osprey’s Black Ops which I am also keen to try out at some point so some of the figures could easily be used with them.

Something to think about.

Space Hulk always looked fun but I never got to play the game:(. The layout always reminded me of our early forays into D&D, but on a far more professional level! Some days I still hanker for those simple games, but the flap of butterfly wings always takes me onto something else;)

1st edition Space Hulk and the expansions were good fun and when you used a timer as the marine player it could get incredibly tense - the film Aliens inspired much of the content methinks! The second edition had far better Terminator marine figures but the third edition - with the super detailed ‘art house’ models killed it for me. I have no objection to detailed models as long the designers bear in mind that these are effectively gaming pieces first and foremost, not better suited to a diorama.

Star Saga has a lot in common with Space Hulk but has far more depth to it - not complexity as such, just more substance.

I am looking forward to painting the figures which is something i never thought I would hear myself saying!