Preparing for the final act 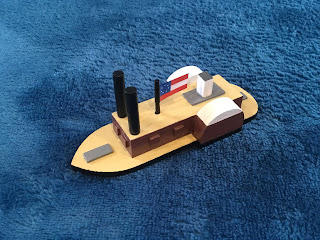 Loosely based on the C.S.S. General Stirling Price - the elongated hatch cover on the foredeck will be mounting a gun in due course

I have built as much as I can do for the ACW project in advance of the final order from Warbases. The last link you see above and so the Confederate River Defence Fleet is moving along nicely.

I have built 39 models so far and now reckon that I have a further 15 to build to complete the line up. These are all straightforward with the only tricky little number being the small octagonal casemate ironclad I have still to build. The final two models I shall be building for the collection will be the U.S.S. Monitor and the C.S.S. Virginia which is kind of fitting in a way as it was those two that really started my interest in the naval side of the ACW.

I will be looking at holding a formal fleet review once the last models have been built but for now you can see the full collection - plus the two Turkish ships and H.M.S Superb. 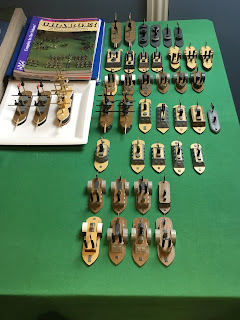 Union ships forming the top three rows whilst the Confederates are the bottom four. The start of the Russo Turkish War is on the left in the tray.

I have in mind an off the wall naval project - something by way of an indulgence and a cheeky way to tackle a period that I would never dream of painting the land side for....

A fleeting glimpse of your ships (sorry I couldn't resist) only whets the appetite for the full review when eveythings finished.

I am hoping to be able to do that sooner rather than later! The pressure is on a little as I shall be back in the office from the beginning of July.

Should be OK for then though.

Thank you old chap! the final phase is organised so once Warbases have swung into action it will be full steam ahead (damning of torpedoes optional!).

I am pleased with them on a number of levels but mostly because for the first time in donkey’s years I have started a project, stuck with it and saw it through to the end.

There is hope for me yet!

I am still coming to terms with the fact that not only had I built them all but have also managed to ‘stay the course’ with the project. This is a very radical concept for me and my butterfly like mind!

There is an end in sight as far as the ships are concerned and the accompanying rules will be appearing in due course so all in all it has been a personal milestone in many ways.

It has also been enormous fun.

A fantastic amount of work with a great payoff. You make me want to revisit my languishing ACW ship collection, none of which, I am ashamed to say, are scratchbuilt.
Can't wait to see them in action.

I have really enjoyed the process of building the models as well as coming up with the rules - and actually seeing it through as well!

I have an action in mind but before that there is a small game I want to try out just for the fun of it.

I looked at various commercially available models but for some reason they never did it for me and besides, building them was a huge amount of fun.

David -
That's is sure a fair old fleet - two fleets - you have built for yourself. Great looking collection!
Cheers,
Ion

Warbases have my order in the production queue which means it should not be long before I receive the bits and pieces I need to finish. It has been a really positive experience building the models and writing the rules to go with them and I am very pleased with how it has all come together.

The final models count will be of a similar size to that of eight years ago bit with a couple of crucial differences. Firstly, this collection covers not only the inland waterways but the coast and the high seas whereas the previous version was solely designed with rivers in mind and secondly, I have been painting the models as I have built them which has been enormously therapeutic and hugely sensible!