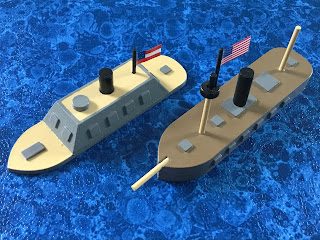 The two models that will be getting a facelift. Both will be reappearing as something rather different by the time I have finished with them!

After the ankle related incident of the Easter weekend it was with some relief that I was able to once again resume using the man cave located in the loft and working on my ACW naval collection. I currently have four models being painted - 1 for the Union and 3 for the Confederates - and the order is in with Warbases for the parts I need for the final batch. To finish up the ship models for this project I decided that some of the earlier models wold need refurbishing or replacing and so far this has been completed with the exception of the two models you see above.

The Confederate casemate ironclad in the picture was the first of the type I had built and whilst she has given good service (as the C.S.S. Secessionist) she is really too large compared to the other models used alongside her. I do not want to abandon her though so I am planning to remodel her into something rather more fitting. She will need a new hull and the gun ports will need to be removed and replaced. There is also the small matter of her funnel.

I will say no more at present as this will spoil the surprise!

Similarly the Union ship - based very loosely on the U.S.S.Galena but without the curved hull - is also going to be given a rebuild. This will be rather more involved as she will be growing a further mast and losing the rather larger funnel in favour of something a little more appropriate.

Again, I will say no more so as not to spoil the surprise....

My order into Warbases features some additional hull templates and some revised gun carriages as the type I ordered originally are better suited to fortress guns rather than ship borne. The revised version will look far better. There are also some ‘walking beam’ components as a number of ships featured this as part of their power plant. Originally i planned to make use of the version available from Peter Pig but as this is true 1:600th scale it is a little on the small side for what I want. For the record I estimate that I will be looking at around six ships that will feature this.

I am confident that the ships for this project will be completed in their entirety by the end of the month which means that I can then think about the terrain I want to build to go with them.