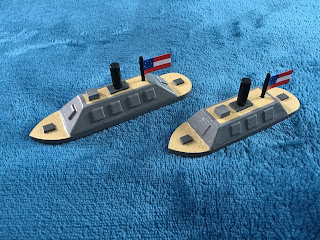 Two slim hulled generic looking casemate ironclads with a single gun port fore and aft. Had I been building these from scratch I would have opted for three gunports along the broadside of the larger of the two and two for the smaller. Within the context of my rules it does not matter as the gunnery factor is based on gun types and number and often does not correlate with what the model looks like!

Although I started the four paddle steamers first I have finished the two ironclads ahead of them. I am rather pleased with these although the gun port are the original versions which are larger than what I am using now - 5mm squares as opposed to the old 6mm size. This means for the Confederates I have two ironclads to build from scratch and one to convert and they are finished. I am still undecided about one of the two that want to build (the other being the smaller octagonal casemate ironclad) and am looking at C.S.S.Baltic or the famous C.S.S. Virginia. If I opt for the latter I will naturally build a U.S.S. Monitor.

Once the current crop of paddle steamers are painted (which will be today) I will have four more to build for the Confederates together with a commerce raider and a blockade runner and that, with the ironclads, will be them finished.

I am getting there!

And fine looking beauties they are too. Bodes well for future naval projects ;-)

Many thanks old chap and you are absolutely right! The Cogs are whirring....:-)