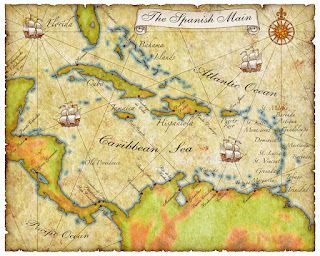 One of the great and enduring things about the blogosphere is the willingness of others to share ideas and offer thoughts and opinions on matters of personal lofty contemplation. In my last post I mentioned about the choice I was facing between two projects - pirates and the Napoleonic Wars - set in the age of sail. I am unable to decide between them as, in truth, I would really like to tackle them both despite the similarities. Both will involve a small number of ships and a land element - the latter being Portable Wargame sized.

After carefully thinking about it I think I may have found a good compromise - and the comments from my previous post have certainly helped to point me in what I think may be the right direction (thank you chaps, as ever much appreciated).

I will be tackling both the pirates AND the Napoleonic Wars set against the backdrop of the Caribbean.

The plan at this stage is to use Black Seas for the latter and Oak and Iron for the former as far as the ship models are concerned. I would have liked to have built these myself but for a variety of reasons it makes more sense for me to use what is readily available rather than starting from scratch. Although I am not a huge fan of 15mm figures as a rule I will be using this as the scale for the land stuff - the Peter Pig ‘Pieces of Eight’ range being the first post of call. I will need to think about the Napoleonic land side but that will be later rather than sooner but I have been casting covetous eyes at the range available from Stonewall Miniatures - they are really nice! The Napoleonic ship models I fully intend rigging and so this will be a slow burner - especially as I have something else to fit in beforehand and in advance of starting either of these two related projects.

Once I have the last of the ACW ships built I shall look to paint up the Oak and Iron ships from the base game - I may need to add to them at some point just to round out the variety of sip types available - which will at least enable me to indulge in all manner of piratical shenanigans. I have a cunning plan in respect of the troops for this so will be needing to get an order for Peter Pig together sooner rather than later so as to strike whilst the iron is hot.

Needless to say with this reshuffle there will be casualties. I shall be parking the Russo Turkish War naval set up to one side. I am not abandoning it but it will have to wait before I can tackle it as I really want to get some age of sail games in.

I picked up the download and they certainly look interesting! That is a great blog for the eye candy and I best get a wriggle on with getting some figures organised!

They are good figures. I used them for a Barbary Pirates game I did several years ago (https://seanavalgazing.blogspot.com/2015/12/dang-2015-manning-ships-part-2.html).

Interestingly enough, it looks like Stonewall is using one of the photos from my blog.

They look very nice and I will certainly take a look at your blog! There is a lot of potential with the whole Barbary Corsairs thing....dang it, there is another idea....:-)

New projects are a bit like Pandora’s box matey. The minute you open it...

It is a good job I can resist anything except temptation then! Seriously though, For the Napoleonic side the limiting factor will be the ships as I am expecting rigging to be an exercise in restraint and patience - meaning I shall only be tackling a few models. Luckily that will be fine for the theatre in question!

In my world these two projects equate to one normal sized one and for sure they will be worked on over an extended period. The last of the ACW models will be first.

I am trying to make sure that there a safety net over Pandora’s box for when I do open it!

I looked at the Stonewall site for the first time thanks to your post. I spotted their 10mm Napoleonic naval range and have ordered a few ships guns for my putative siege campaign. I know they’re not ECW style but they’re good enough for me.

There is some good stuff on the Stonewall site and I reckon that he Napoleonic ships guns would do just fine for your siege campaign.

I am looking long and hard at the 15mm ships crews and Marines for the Napoleonic Wars - they are really nice!