Taking to the High Seas with Model Ships 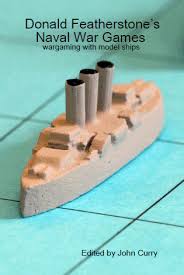 Essential reading for the naval wargamer

A comment on one of my recent posts from Steve's Wargame Stuff went something along the lines of - 'could you recommend a scale and UK model supplier for a complete naval novice? I have an 8' x 4' table to use but have no idea on what scale to play. Any advice would be very welcome.'

I must confess to probably being guilty of assuming that everybody that has read this blog is a naval wargamer and so many of my scribblings, whilst obvious to me and those 'in the know', may be less so to someone that has never gotten their wargaming toes wet! This post will will hopefully address some of the points requested. I initially considered responding to the comment but quickly realised that the answer would be far longer than one could reasonably fit into a response, hence the following post.

Without going into a long ramble about scales, rules and periods if I had to sum up in one word where would probably be a good place to start on a naval wargame adventure it would be - pauses for a long drum roll -

The reason for this is simple. The range of ships available from them in both 1/1200th and 1/3000th is huge. The 1/1200th scale models are primarily up to the ACW period so ancient and renaissance galleys, the Armada, the Dutch Wars, the American War of Independence and Napoleonic Wars are also included. For 1/3000th the range covers a huge selection of models for the pre dreadnought era (effectively from the end of the ACW to 1905 when HMS Dreadnought was launched) WW1 and 2 and even for modern naval actions. Starter packs are available for those wishing to try a period and all of the models come with a sheet of details for the class represented.

As a general rule where weapon ranges become shorter then larger models can be easily used so on an 8ft by 4ft table for reasonable sized WW1 and 2 actions (with perhaps a dozen or so models a side) 1/3000th is as good an option as any.

As far as rules are concerned then John Curry and his History of Wargaming project  - History of Wargaming Project is a great place to start with a couple of essential naval rules titles on offer from Donald Featherstone and Paul Dunn - F. T. Jane and Fletcher Pratt may be a step too far for the naval novice! There are also a lot of rules available for nothing from Free Wargames Rules.

For the most part you will not need any scenery to speak of either!

This post is really only touching the tip of the iceberg as far as scales of models, manufacturers, rules and other bits and pieces are concerned and so should anybody want to ask any further questions then drop me a line and I will try to help further.
Posted by David Crook at 14:48

One period that you neglected to mention (and to many the most interesting) is the "Pre-Dreadnought" period (after the ACW and before WW1).

Ships are very interesting and gunnery ranges are short . . . and there are no aircraft to worry about.

In North America I would certainly recommend Panzerschiffe 1/2400 scale ships for cost and selection . . . but I understand that shipping them to Britain ofter results in Customs charges.

For rules, I would suggest taking a look at the "Naval Thunder" rules at Wargames Vault:

They cover not only the Pre-Dreads, but WWI and WWII as well. Rules are .pdf downloads and are reasonably priced.

Note that the Pre-dread rules need the WWI rules as well.

Finally I would recommend against anything smaller than 1/3000 scale. The 1/6000 might be okay for WWII if you have "young eyes" but the ships are TINY.

One final bit of advice . . . choose your water color wisely . . . many colors that look good in small amounts do not when covering a large surface.

And, what a big iceberg it is!

Many thanks for this - and apologies for not splitting the pre dreads out! I have tweaked the blog post to incorporate them accordingly!

You are not wrong!

Thanks a lot for the info David. I think this may be a project for '13. I think I'll be looking into the WWI era as it has always held an interest for me ..... for some reason!

Glad to help! If you need anything else give me a shout.