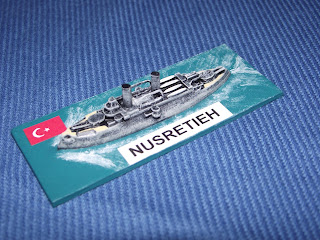 I put this picture up on its own simply because I rather liked it! You have got to love those French inspired Russian built battleships!

I have managed to finish the eight pre dreadnoughts for Fezia and Rusland so all I have for the current batch of models are the coastal defence warships which are already on the painting tray. I have two squadrons of four ships for each side and the plans are already in hand for the inaugural fleet action - coming to a blog near you soon....;-) 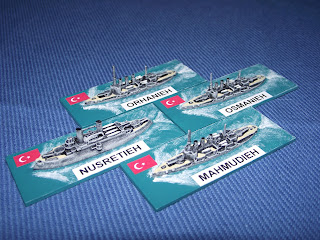 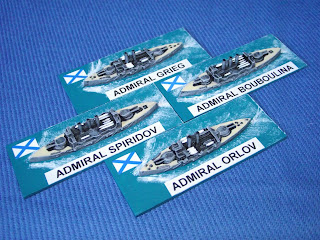 The Rusland opposition - a pair of Fujis and a pair of Shikishimas (they are the ships with three funnels).

All of the above models are from Viking Forge and although they are quite detailed the castings suffered from mould lines and a fair amount of flash. For the record the military masts were a pain - as was cleaning up the turrets!

I have now painted 70 ships so far this year and have decided that my goal will be to paint at least 365 in total. I have more than enough ideas to fill this total and that does not include the previously mentioned Pacific set up. All will be revealed in due course.

Finally, I was unsuccessful in my recent second interview - because the person that I was being employed to replace changed their mind and decided to stay put.

Disappointed and annoyed does not even begin to scratch the surface!

One has to be philosophical about such things and I am ure that something will turn up in due course.

I expect old Omar might have something to say that would capture the spirit of the times....;-)

Great looking ships and a bold plan. Sorry to hear about your latest employment travails. Sounds a little like what happened to my brother. He was one of six candidates for five positions. Didn't hear back after having a great interview, came to find out instead of hiring five they decided to let three go. Really?

Many thanks on both counts!

Sadly it is very much an employers market and it seems that they can do pretty much what they want and when they want to.

Back to the drawing board!

Commiserations on the job front. Next time, you'll get the bear.

Many thanks old chap! I reckon that my target of 365 ships is certainly achievable - especially when you consider that a third of them will probably be destroyers anyway!

I was very disappointed about the job but its gone so back to the drawing board.

It is beginning to come together quite nicely and I am looking forward to tackling the dreadnoughts in due course.

Lots of painting to come - mostly shades of grey!

This is beginning to sound like a wargaming version of Julie and Julia...

Great looking ships again and good luck on your target for this year. I've finished, a whole, two ships this year :-)

Sorry you didn't get the job, I had everything crossed too :-(, I hope you can find one soon.

Hang in there on the job search. I'm really pondering what to do myself in the likelihood that the company pushes me out the door before my planned retirement date.

May just throw in the towel at that point and retire anyway. Who will hire a geezer already past 60 ? Judging by your photo, you're better positioned in that regard. ;-)

I LOVE those ships - while later warships were much more effective, there is something wonderful about the earlier era designs I think

Love the Nusretieh too - the armoured ram bow in particular!

Even 2 id better than nothing and if you carry on at that rate by the end of the year it would be 6.

That would be enough for a game as my recent posts prove.

You will get there!

Same as me with a job at some point!

Thank you sir - and coming from you I will take that as high praise indeed!

I shall be 53 this year but the job market seems to be allergic to people past 30 - I shall just have to keep on keeping on.

Should you opt to throw in the towel then think about the projects you can complete (and the copious amount of the inevitable DIY!)

Cheers old chap! They certainly have a charm all of their own and I must confess I wish I had painted them in a pre dreadnought scheme - still, I have others that will be in due course....;-)