Kriegsspiel by every other game....

My recent overdose of models soldiers and all that goes with them - I refer to seeing a portion of Eric's collection in all its glory as well as the battering of the eye candy senses I received at Salute - as well my acquisition of a select number of classic wargames titles has given me much food for thought in a quite unexpected way. I found myself thinking about just how I want to represent armies on the tabletop - do I want to own a collection of thousands of figures with all the associated time, cost, storage and effort to assemble? Is the somewhat sterile approach of using blocks the way forward for me? Is there a workable compromise? 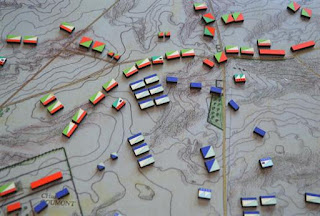 A game of Kriegsspiel in progress with no prizes for guessing the battle being refought!
﻿

There are few that can argue that Kriegsspiel has had an enormous impact on the wargame as we know it. I was rather intrigued to find out that the very first version of this was in fact grid based and with 3D terrain - the so-called 'Strict Kriegsspiel'. This particular side of the hobby went through several evolutions via the use of maps rather than model terrain before the Little Wars figure based game appeared but certainly still has its devotees, especially since Bill Leeson translated the German text into English back in the early 1980s. Much of Leeson's work is available from Too Fat Lardies and obtaining the blocks for use with the game from such suppliers as Irregular Miniatures or Command Post games is straightforward enough. 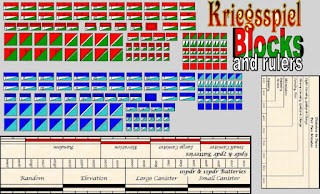 Unit types and materials needed to play the original Kriegsspiel.
I have played Kriegsspiel a couple of times in the past and have enjoyed the experience. It does not however, lend itself to solo play very easily which is an important consideration for me. I always liked the nondescriptness of it; the typical 'army red versus army blue' tactical exercise, free of any national bias. Essentially Kriegsspiel does exactly what it says on the tin in that it is a tactical training toolkit. Any wargamer worth his salt could in turn use this to refight a particular action of their choice with little difficulty.﻿
﻿

Recent events (and I include attending Salute in this) have given me much pause for thought in terms of how I want to fight my battles and I was properly surprised by this as I thought I had long since settled this argument with myself in favour of small selections of figures supported by the block armies. Seeing some of the model armies on display and in action has served to awaken many old ghosts and so wanting to amass armies of figures is once again testing my resolve.

If I am honest with myself (and that is not something I am usually very good at!) I think I like the idea of owning massed armies rather more than I am able or willing to execute this. This means then should I want to fight large battles I will need to make use of the block collection - which is exactly what it was designed for. Smaller actions could easily make use of figures and models - my Battlegroup plans are a good example of this as is my projected The Men Who Would be Kings/Congo set up.

The humble block - and I mean the military symbol type rather than the Command and Colours variety - has a distinguished place in the world of the military and of the wargame in my opinion and as I have said before - so who am I to ignore this noble tradition?

I love your block armies and, one day (probably when I retire, if I make it that far!) I'll make some myself. For now its a project on the 'to-do- list that will have to wait.

that is very kind of you old chap! the block armies were very easy to put together and certainly did not cost a lot. I used the blocks from a Jenga style game available from The Works at a couple of quid a box (as I recall I used around 10 or so boxes), the labels were drawn using MS Paint and printed onto A4 label sheets and then cut out and stuck on the blocks. I should mention that I had the blocks sawn in half by a local carpenter.

Easy to make and I plan to draw some maps up on A2 sized paper for a proper military map type game.

Using them is a wargame but without figures.

KS is great. It really lends itself to team games.

I am really pleased you have commented and I will tell you why. You have given me an idea.

What about Kriegsspiel meets Little Wars?

I reckon that has some potential so I shall go away and think about it....:-)