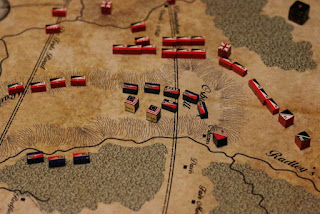 I enjoyed myself enormously with the ACW game in my last post. There are, however, a number of points arising that I want to address going forward. These are mainly around the 'look of the thing' and how the action is reported.

Directional Arrows. I intend producing a number of these in various colours to show things like direction and distance of movement, designating targets for firing or anything else that needs to show what has been with what is now.

Following the pictures gives a good idea of this but you only need a picture to go missing and the whole thing can get a little tricky. As an alternative (or even alongside) I also want to investigate the possibility of adding text etc to the pictures themselves - this will mean experimenting with the 'Markup' feature on my various items of Apple equipment.

Named Commanders and unit designations. To add a little flavour this is an area that needs some further thought and of course has implication for unit identities on the map. At present my blocks are anonymous in that they represent troop types only. Thus far my thinking runs to using coloured spot labels on the blocks with a roster sheet for the designations. I do not want to be too restrictive here - it would defeat the object of using blocks in the first place if I, say, marked a blue unit as the Iron Brigade - it would be that for evermore!

Clarity of purpose. Having a properly scoped scenario with clear victory conditions - the all important before and after the action itself.

Quick Reference Sheets. This is a no brainer really so I will endeavour to make sure I have these available for each game I play, ideally a couple of them.

A lot of the above is 'chrome' to an extent but should help to follow the action and also streamline the whole affair from a playing perspective. I have in my mind's eye how I want to present block games so I merely need to fill in the details.

Dispensing with a grid. Now this is something a little more ambitious. I have been mulling over using the blocks on a normal table top. I have seen a number of games on the net played in this fashion and of course the original Kriegsspiel (not the 'Strict' version) used a map. The advantages of this are many but for now the main point for me is that I will be able to draw custom terrain maps to fight over should I wish. The 'art' side of this should not present too many difficulties especially as I have a budding artist in the family to go to for practical advice.

I would also be able to fight 'normal' games using model terrain - another example of the 3D military map my block games aspire to.

Much to ponder then but for now it is back to painting ships.
Posted by David Crook at 08:42

Lots to think about.

There is but on the whole I have a pretty good idea of where I want to take the concept and what I need to do to get it there.

There is some essential 'window dressing' to be undertaken which will enhance the whole and then I have something rather special planned.

I would think that dispensing with the grid would allow more interesting maneuvers and tactics, without any complications, given the size of the armies you are using. And seeing that you are playing solitaire games, any disputes about the legality of a maneuver would likely be settled amiably.

Hand drawn maps, on the other hand, are a lot more iffy. I've tried one or two and I can say that making maps is more drafting than drawing -- the devil is in the details. (Disclaimer: I hate doing details, so that may color my opinion.) For instance, roads are often drawn as double lines, which is hard to do. Hills, either as elevation lines or as hashes need to be neat in order to look right. And woods... well. Not impossible, but time consuming, especially on a large map, and especially if you are going to post pictures of the battles fought on them on the web. I really like the look of drawn maps and block armies -- it looks serious. But...

That is a good point well made about maps in general. If I am honest what I envisage is probably something like top end sketch map - not something akin to an Ordnance Survey type. I need to research this further but I know the type of look I want in my mind's eye and it would look fine to fight over using the blocks.

You also make a valid point about dispensing with a grid (although grid based games remain my preferred choice). It is something I have been thinking about and I shall be writing more about this soon.