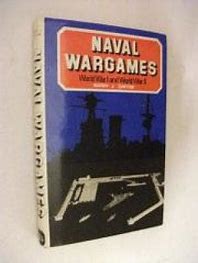 To support the rather mysterious 'mini project' mentioned in my last blog post I have been revisiting an old friend for inspiration. The old friend in question is the book pictured above.

Barry Carter's book is certainly old school and the fact that his rules use a square grid may raise a few eyebrows from die hard naval wargamers but for all that this is a cracking read. I had an ulterior motive when I picked this up to read as I wanted to look closely at his suggestions for rules - and I am very glad I did.

As a rule naval wargamers can be a rather pedantic bunch. I mean no offence when I say this but let's be honest, there is an element of geekiness about being able to quote technical specifications about one's chosen battlefleet - from main gun calibre down to bunker capacity via barbette armour thickness and wardroom cutlery. I have no problem with this and will spend many happy hours looking at technical specifications from Conways or Jane's Fighting Ships - it is all part of the fun really.

I mention the above with my tongue firmly in my cheek but it is true and it does serve to colour how we like to see our ships represented on the tabletop. I believe that Barry Carter would subscribe to this theory as his rules are quite 'intimate' in how they tackle ships. Firing is handled on a '1d6 per barrel' basis and damage is recorded by using hit points that increases as the firing gun calibre gets larger. Ships are given a 'sinking rate' which is not calculated based on any formula I can see - rather it is based on the gamer's own research on how durable a given ship would be. The author says "How the reader arrives at a sinking rate for each ship is a matter of personal preference. I like my battleships to have a rate in the range 700 to 1,200 points." There is small sample of selected ship types with his suggested sinking rates which can serve as a guide for other classes.

Aside from a small mini painting project in support of my next game I have also been stripping the rules out of Barry Carter's book into a convenient playsheet. Actually it is four sides of A4 but is far more convenient to use than thumbing through the book. This is virtually finished as all that remains are the sections on minefields and submarine operations

I shall be using these rules for my next game and the mini project involved pressing ahead with a number of WW2 ships from the Axis and Allies collection I have amassed. the ships are painted and varnished and I only need to tackle the bases and draw up the ship cards and that part is ready. I will also need to get a square gridded playing area sorted out. I have a cloth I can use but it is a little on the dark side however it will suffice in the absence of anything else.

I am rather excited about this and hope to be running the action over the forthcoming bank holiday weekend.

Many thanks for your ideas - that is certainly something for me to experiment with.

It has proven to be quite a revelation extracting the rules from the book and they will come in at four sides of A4 (I could condense it further but I dislike cluttered play sheets). I enjoyed the book and BC's approach to naval wargames is very refreshing.

There is a postscript to this in that he recommended using index cards for the ship specs. Many years ago (the early 1980s in fact) I remember using these for another set of rules. The ship cards have long since gone but I still have the blank cards!

When I was a sprat my local library had this and Featherstone's Naval Wargames; I always thought using Carter's rules with the damage ratings and damage capacity ratings from the Fletcher Pratt rules extract in Featherstone would be a good idea. Don't remember if I actually did it.

Of course i now have my own copies of both (and Hague's two) so nothing stopping me except time and effort.

Now that is a good idea and is certainly something worth considering. I have the very same books myself so will give this some thought.

For now though I shall be using the rules as written as a baseline before tweaking them although I will be doing so at some point with a couple of areas.

I read this with much interest!

I am also about to play some WW1 games solo in 1/3000 scale using the rules. I don’t have much space so gridded my sheets with 40mm squares. My playing area is 42x30 squares.

I appreciate Eric’s post giving an idea how to calculate the ship values I couldn’t remember.

I last played these in 1978 and then a few games around 2000. I am getting on a bit now so they will give me a fun solo set to hang a mini campaign on later.

I have extracted the rules from the book and have compressed down to a couple of play sheets but as yet have not added in Eric's values. My timetable has been a little derailed over the last couple of weeks but I hope to be in action by the end of the month.

The rules look pretty good for a campaign and for my part I will probably go with 3" squares.

Best of luck with the WW1 stuff - I will be interested to hear how it works out.