Through the Jungle and Across the Desert

A classic set of rules for adventures within a Colonial setting during the Victorian era - and with some additional possibilities....﻿
﻿

You could be forgiven for thinking that despite my insistence that I am now focussed on certain projects my recent blog posts seem to have been somewhat at variance with this noble intention. The opposite is in fact still the case - I am focussed on my project list but it does have rather a lot contained therein! - and so the following post is most certainly within my sphere of activity.

The fact that it is most definitely not something I am looking at present should not detract from the overall scheme of things - it will take its place in the line up at the appropriate time although when that happy state of affairs will come to pass I have no idea....

The Men Who Would Be Kings by Dan Mersey are the Colonial set from his very successful 'Rampant' series of low level skirmish type rules. They, as have the others in the series, proven to be extremely popular for many reasons as, aside from being a great set of rules, they are also relatively easy on the budget. Forces for a typical game can vary from around 40 to 60 plus figures or, to put it another way, a couple of boxes of plastic figures a side.

Congo - the rules and the game accessories that come with it.

Congo is a set of rules that work at a lower skirmish level are cover mainly adventures set during the Victorian age in the jungles of Africa although not exclusively so. Again, these are quite budget friendly in terms of the forces one would need to have game being typically around the 30 to 50 figures level. 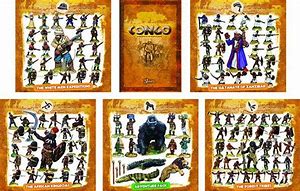 Congo with some of the figure sets available from Wargames Foundry. I saw these at Salute and they look very nice indeed!
﻿

For high drama and excitement there can be little doubt that the Colonial era has this in abundance. For the wargamer it is very well supported with figures, terrain and a wealth of good quality research material. It is a period that I have not played very often but have always enjoyed it when I have done so. However, my plan is to use both the above rule sets for actions set a little later than for when they were intended.

My interest in the so-called 'sideshows' of the Great War - mainly the Arab Revolt (including the Sanussi) and the East African campaign - is well known. I am keen to game either or both of these in due course and I believe that using the above would work well - as indeed possibly for the Afghan campaign at the end of the Great War also.

I have made no decisions yet as to figures or anything similar but can see no reason why using these rules should not work for the kind of game I want to run.

That is pretty much where I am with this particular piece of my project list but it will be something to explore in more detail in due course.

In the meantime though, on with the ships....

I like the MWWBK rules. Relatively simple and fun I am considering utilising them for my Zulu War stuff, although I am currently be sidetracked by the Lardies 'What a Tanker' rules... (I'm nothing if not a typical Wargames Butterfly!!)

I play both Congo and TMWWBK’s. Both sets are great rules and easy to learn. Much recommended.

You must resist ... Resistance is futile!

I know what you mean about the butterfly analogy! Seriously though, I will be using these but not any time soon as the ships need to be finished first of all.

They read very well and I have heard good things about them. One for the future though as I have a number of other things on the list in front of them.

Well the rules are on the bookshelf but I will not be doing anything with them for a while - you are of course quite correct about resistance. It was certainly futile when I saw Congo at Salute....

For sure, but when that will be I have no idea!