Regular readers of this blog will no doubt remember my mentioning the late Eric Knowles and his famous WW1 Madasahatta campaign. To the uninitiated Madasahatta was an island in the Indian Ocean which boasted both a German and a British Colony, several indigenous tribes of natives and an Arab trading concession. The campaign was designed and organised by Eric and was loosely inspired by the Great War in East Africa. The campaign was fought during the late 1970s and early 1980s by a number of gamers including Bob Cordery, Chris Hardman, Neil Fox and myself in the later stages.

It was enormous fun and all that took part enjoyed the experience.

Luckily for the wargamer of today a lot of written material concerning the campaign survived in the hands of Bob Cordery. Sadly, and to the best of our knowledge no photographs are known to exist of the campaign - bear in mind this was pre-digital cameras and computers -  but one could easily picture the scenes described in the campaign 'newspapers'. To remember Eric and to celebrate his finest wargaming creation Bob has turned the surviving content into the book you see below, supplemented by some anecdotes from those that took part and Bob' own personal tribute as well as some Eric related material. 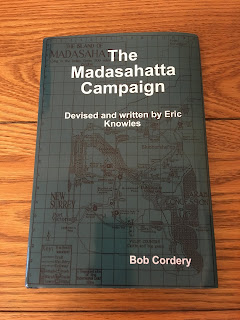 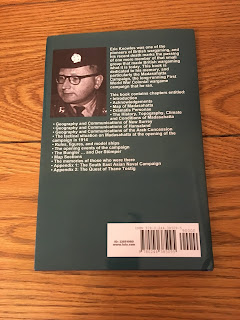 ….and the back with a list of the chapters contained therein.
﻿
I will not go into detail about what is in the book - it would spoil the surprise - but suffice it to say there is a veritable smorgasbord of good ideas and inspiration. In fact, The Men Who Would Be Kings are a set of rules that could have been written for Madasahatta!

From a personal perspective this is a superb reminder of a wargames campaign that has given me many years of enjoyment and interests I never thought I would have considered - as well as some lifelong friendships. Bob has done a sterling job with this book (and it is available to purchase) and so hopefully the fun that was Madasahatta can be enjoyed by a new generation of gamers whilst those of us that were there have a wonderful tribute to Eric and the memory of some truly great wargaming times.
Posted by David Crook at 09:12

Thanks for the effusive write-up. Hopefully the book will go some way to ensuring that Eric's role in UK wargaming in the early days will now be properly recognised ... and that Madasahatta will serve as an inspiration to a whole nee generation of wargamers!

It all looks rather splendid and it would be great fun to revisit in some fashion. I certainly hope that it becomes widely known via the book so that Eric is duly recognised for his efforts. As I recall I am sure he penned a couple of articles for the Journal of the 20th Century wargamers - SOTCW but would need to check.